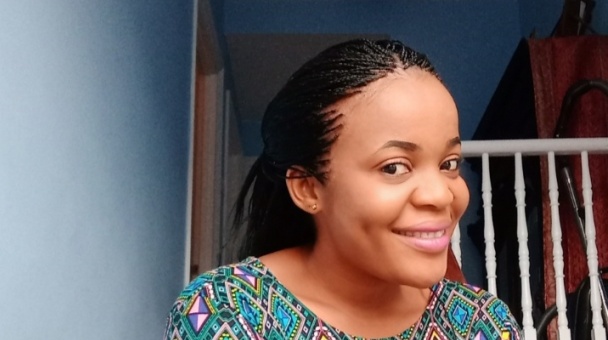 Mimi Mefo has been working as a print and broadcast journalist in Cameroon for eight years. In April 2018, she became the first-ever woman editor-in-chief of the English service of the private media house, Equinoxe TV and Radio, where she had worked as a reporter for several years.

In September 2018, Mimi established her own news platform, Mimi Mefo Info, seeking to provide fellow Cameroonians and readers throughout the world with information about the escalating violence and unrest in Cameroon’s western regions.

As a result of her reporting, Mimi has faced death threats, online harassment and physical surveillance. In November 2018, she was arrested and imprisoned, after reporting on the killing of Wesco Trumann, an American missionary, by the military in the North West region of Cameroon. She was released four days later, following unprecedented national and international pressure.

Mimi has won numerous awards for her work, most recently the 2019 Freedom of Expression Award for Journalism from our colleagues at Index on Censorship. She dedicated the award to those ‘who continue to stand up for press freedom’. You can read and watch her speech here.

Mimi arrived in the UK in February to begin her five-month residency with English PEN. Since arriving in the UK, Mimi has appeared on the BBC World Service, spoken to Masters students at City and De Montfort Universities and the board of AMMPE, and met with fellow writers and activists to discuss press freedom concerns in Cameroon and beyond.

Being a resident at PEN has been an enriching professional development opportunity for me.

I have been able to learn and share my experience with countless individuals, personalities and organisations… These will help build my contact as a journalist and give me assurance as an advocate of press freedom in my country, Cameroon.

At PEN, I also have enough time to carry out research, and write articles on happenings in Cameroon without fear of being intimidated or arrested.

On 23 March, Mimi attended the People’s Vote march in London. Here, Mimi reports on her experiences of attending the march, and the stark contrasts with protests in her native Cameroon.

Mimi reports on the imprisonment of writers, filmmakers and artists in her native Cameroon.

Mimi reports on the launch of the World Press Freedom Index hosted by Reporters Without Borders in London.

Press Censorship in Cameroon: a cycle of fear (May 2019)

Mimi speaks to fellow journalists from Cameroon about their concerns on World Press Freedom Day.

In this special one-off workshop, Mimi will share her experiences about reporting in a local context.

Participants will explore the role of local journalism and discuss the skills and tools individual journalists need, including how to speak to different audiences, the role of social media in disseminating information, and the potential risks of being an active and engaged writer.

The event is in partnership with the Roundhouse, as part of the 2019 Last Word Festival.

In conversation with Yassmin Abdel-Magied

Mimi will be interviewing award-winning activist and self-professed ‘most publicly hated woman in Australia’, Yassmin Abdel-Magied will speak in a special interview with Cameroonian journalist Mimi Mefo about her career, controversies, and experiences navigating the media world (both online and offline).

The event is in partnership with the Roundhouse, as part of the 2019 Last Word Festival.

What can be done in an unravelling world order to shore up international safety protocols?

Rasmus Nielsen, Professor of Communication & Director of the Reuters Institute

Her Excellency Baiba Braize, Ambassador of the Republic of Latvia

RSVP to [email protected]. You will receive email confirmation of your place.