Dr Abduljalil Al-Singace is an award-winning academic, activist, and blogger from Bahrain. He has spent the last decade in prison, where he is serving a life-sentence for his role in the 2011 pro-democracy protests.

In July 2021, Dr Al-Singace launched a hunger strike to protest his ill-treatment in prison, in particular the confiscation of a manuscript he had been working on for years. Amid mounting concerns for his health and well-being, PEN is continuing to call for his immediate and unconditional release. 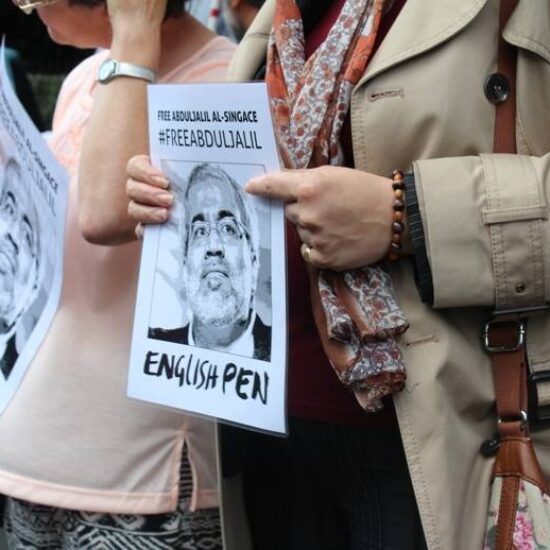 Be careful when you use the words ‘change’ ‘dream’ and ‘democracy’. Those things don’t come so easily to us.

In 2010, leading Bahraini academic and blogger Dr Abduljalil Al-Singace visited the UK to attend a seminar at the House of Lords. During the seminar, he described the deteriorating human rights situation in his native Bahrain, speaking at length about the ‘triad of suppression’:

[There are] three pillars ensuring that activists and NGOs who work on exposing violations are seized and [condemned] somehow, ensuring that they are suppressed. The first is the use of force, torture and ill-treatment. [The] second is the use of the law. And [the] third is the judicial apparatus and procedures.

On returning home to Bahrain with his family, Dr Al-Singace was arrested at Bahrain International Airport. He was held incommunicado and in solitary confinement for six months, during which he was reportedly subjected to torture and ill-treatment, including verbal and physical assault.

Dr Al-Singace was freed in February 2011 following widespread calls by anti-government protestors for political reform and the release of political prisoners. However, just a month later, he was among 13 opposition activists to be arrested for their roles in the pro-democracy protest movement. In June 2011, he was  sentenced to life in prison.

In the decade since, the international community, including the UN Special Rapporteur on Human Rights Defenders and leading human rights organisations, have  continually raised his case and called for his immediate and unconditional release.

Dr Al-Singace relies on a wheelchair for mobility. He also suffers from post-polio syndrome, heart, eye, and sinus problems. Despite this, prison authorities have frequently denied him the specialist medical treatment he requires, citing his refusal to wear a prison uniform as the reason he cannot attend appointments outside the prison compound. At times, Dr Al-Singace has also been denied access to books, television, radio, and even pen and paper.

Dr Al-Singace has launched several hunger strikes during his time in detention, in order to protest prison conditions and ill-treatment, most recently on 8 July 2021. PEN is gravely concerned for his health and well-being and continues to call for his immediate release.