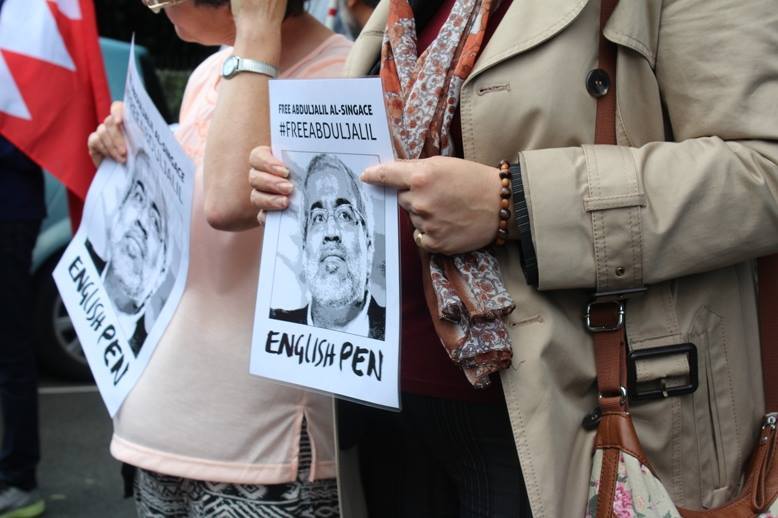 English PEN is deeply concerned for the health and well-being of imprisoned blogger and academic Dr Abduljalil Al-Singace. He is currently on hunger strike, after the manuscript he had been working on for years was confiscated by prison authorities.

Today, 30 July 2021, we join 15 fellow rights groups in continuing to call for Dr Al-Singace’s immediate and unconditional release, and in demanding that his research to be returned to his family as a matter of urgency.

Dr Abduljalil Al-Singace, an imprisoned opposition activist and human rights defender, has been on hunger strike since 8 July 2021. He is protesting against persistent ill-treatment at the hands of Jau Prison authorities, the main prison in Bahrain, restrictions imposed during COVID19 limiting prisoners contact to only five numbers, and to demand that a book he wrote in prison that was confiscated be immediately handed to his family, a coalition of 16 rights groups stated today.

A respected academic and blogger, Dr Al-Singace has spent the last decade in prison serving a life imprisonment sentence. He was amongst 13 opposition activists arrested between 17 March and 9 April 2011, including high-profile political opposition leaders, activists and human rights defenders, who were then convicted by a military tribunal for their roles in the 2011 pro-democracy protest movement.

According to the 2011 Bahrain Independent Commission of Inquiry, Bahraini authorities placed Dr Al-Singace in solitary confinement for two months and subjected him to torture following his arrest, including being repeatedly beaten and “sexually molested”.

Dr Al-Singace launched a hunger strike on 8 July 2021 in response to degrading treatment he was subjected to by a prison officer, to protest the restriction of being permitted to call only five numbers during the ongoing COVID19 pandemic, and to demand the return of his book, confiscated by prison guards on 9 April 2021, and on which he worked for at least four years. We understand the book to be a study of linguistic diversity among Bahraini Arabic dialects, without any political content, yet the book has not been returned despite repeated promises by prison authorities.

On 19 July, the Office of the Public Prosecution referred Al-Singace’s case to the Ombudsman of the Ministry of Interior (the Ombudsman). The statement from the Public Prosecution incorrectly provided that Al-Singace’s hunger strike was also related to “the refusal of the [Jau’s Reformation and Rehabilitation] centre’s administration to allow him to contact his relatives”.

According to the Ombudsman, who cleared the prison officials from any wrongdoing and accused Dr Al-Singace for alleged “smuggling” of his own work, Dr Al-Singace “was not subjected to mistreatment”. This conclusion was reached without Dr Al-Singace’s testimony as he refused to be interviewed. Human Rights Watch has found that the Ombudsman has repeatedly failed to investigate credible allegations of prison abuse or to hold officials accountable. The UN Committee against Torture has also raised concerns that these bodies were neither independent nor effective.

Although the Ombudsman states that prison authorities “did not intend to confiscate the papers”, it confirms “that the reason for [Dr Al-Singace’s] hunger strike was the confiscation of the papers he wrote” and that his work cannot be returned until a “legal decision” is taken.

Many imprisoned political leaders in Bahrain are older and suffer from pre-existing health conditions and consequences of their torture in 2011, which today make them particularly vulnerable to diseases like COVID-19. Dr Al-Singace has several chronic illnesses, suffering from post-polio syndrome, vertigo, causing him to lose his balance and fall, a slipped disk in his back and neck, causing chronic pain, and paresthesia in his muscles and limbs. Consequently, Al-Singace requires the use of crutches or a wheelchair and is among those most at risk. Dr Al-Singace has faced sustained medical negligence by prison authorities throughout his 10-year imprisonment, namely the prison’s regular refusal to take him to appointments with medical specialists over the past four years.

We are thus deeply disturbed receive reports from family members that on 18 July 2021 Dr Al-Singace was transferred to the Ministry of Interior medical facility in al-Qalaa for monitoring and to be given intravenous fluids; by 29 July Al-Singace had reportedly already lost 10kg. Recent outbreaks of COVID-19 reported at Jau Prison create an additional threat to Dr Al-Singace’s health.

Since his imprisonment, the international community has made consistent calls for his immediate and unconditional release, including the United Nations Special Rapporteurs on Human Rights Defenders, leading international human rights organisations, and American, British and European legislators.

The confiscation of Dr Al-Singace’s book is an unjust punishment and the authorities must ensure the protection of his rights, including the return of his intellectual property. We call for Dr Al-Singace’s immediate and unconditional release and for his work to be immediately given to his family.