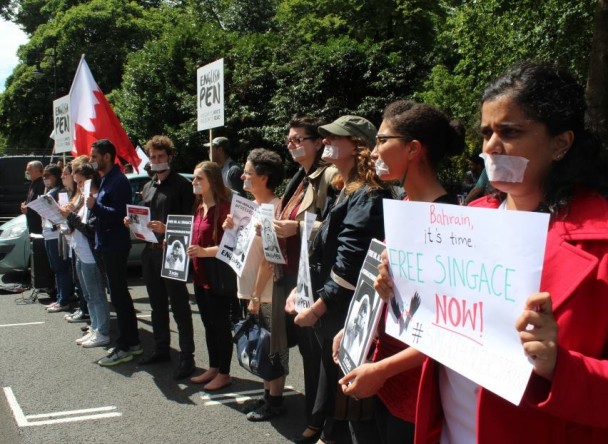 Last week marked five years since prominent Bahraini academic and blogger Dr Abduljalil Al-Singace was arrested Bahrain International Airport on 13 August 2010. Dr Al-Singace had just returned from a conference at the House of Lords in London and it is believed that his arrest was, in part, in retaliation for having spoken openly about human rights violations in Bahrain whilst he was there.

Five years on, Dr Al-Singace is serving a life sentence and today, Monday 17 August, marks the 150th day of his hunger strike in protest at prison conditions in Bahrain. He is currently being held in solitary confinement  at Al Qalaa hospital due to his poor health, and is reportedly being denied access to the full medical assistance he requires. He has also been denied any form of media or writing materials, a restriction PEN members have been protesting by sending pens and paper to the Ministry of Interior for him.

Last week, we learned from the Al-Singace family that he had received a visit from a representative of the Red Cross. According to his family, this was also the first time that Ministry of Interior officials had met with Dr Al-Singace during his detention, an indication that the ongoing campaign for his release is having some impact. The news that Dr Al-Singace is to be granted  access to magazines and newspapers, which he has been deprived of in recent months, also suggests that international support could help lead to an improvement to his conditions and those of others detained in Bahrain.

In order to welcome this development and maintain pressure on the Bahraini authorities we are now  inviting magazine editors to send a copy of their latest issue to Dr Al-Singace via the Ministry of Interior. We are also continuing to encourage supporters to continue to challenge the ban on writing materials, sign our petition, and share details of his case.

Please send a magazine for Abduljalil Al-Singace along with a copy of the letter below via the Ministry of Information. We would also ask that you photograph the package you are sending and share the photos with us via email ([email protected]) and on social media with the hashtag #SingaceHungerStrike and the handles @englishpen @moi_bahrain.

I am writing to you on behalf of [INSERT NAME OF PUBLICATION] and as a supporter of English PEN regarding the ongoing detention of Dr Abduljalil Al-Singace.

According to PEN’s information, Dr Al-Singace, a prominent academic and blogger, is currently serving a life sentence in Bahrain. I share PEN’s concerns that Al-Singace has allegedly been subject to torture and ill-treatment whilst detained, and that he has now been on hunger strike for 150 days. I also join PEN in calling on the authorities to ensure that Dr Al-Singace has access to the medical attention he urgently requires.

Whilst remaining extremely concerned for Dr Al-Singace’s health and well-being, I welcome the news that he will once again be allowed access to magazines and newspapers.

Please find enclosed a copy of [PUBLICATION] which I would be most grateful if you are able to pass on to Dr Al-Singace on our behalf.

Please send writing materials along with a note requesting that they be passed on to Dr Abduljalil Al-Singace to the following address: