Skip to content
Home > Campaigns > Bahrain: London stands in solidarity with Nabeel Rajab on his birthday

Bahrain: London stands in solidarity with Nabeel Rajab on his birthday 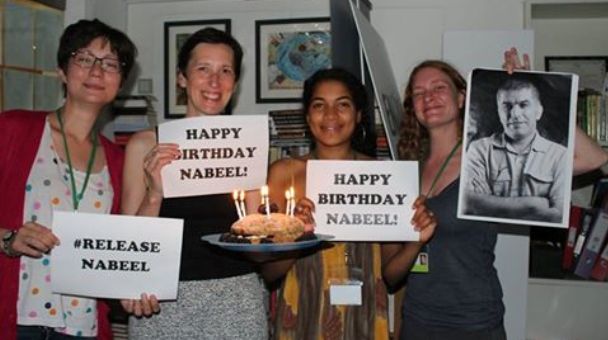 On 1 September, English PEN joined fellow organisations and friends of human rights defender Nabeel Rajab to mark his 52nd birthday with a protest at the Embassy of Bahrain in London. Representatives of Amnesty International, Bahrain Institute for Rights and Democracy,  FIDH, Index on Censorship, and Redress were among those in attendance, all jointly calling on the Bahraini government to release Rajab immediately and unconditionally.

Following his most recent arrest in June 2016, Nabeel Rajab is facing up to 15 years in prison, accused of spreading ‘false or malicious news’, ‘offending a foreign country’ and ‘offending a statutory body’ through his condemnation of the conditions in Bahrain’s infamous Jau Prison. His trial hearing is due to take place on 5 September.

There are widespread concerns for Nabeel Rajab’s health and well-being as a result of the poor conditions in which he has been held. When Rajab was granted a temporary release in order to attend the funeral of his mother-in-law on 1 September, activist Fadi Al-Qadi posted the following photo on Twitter, simply stating ‘Jail ate his health’:

With thanks to Moosa Satrawi of Bahrain Alyoum for the video footage.