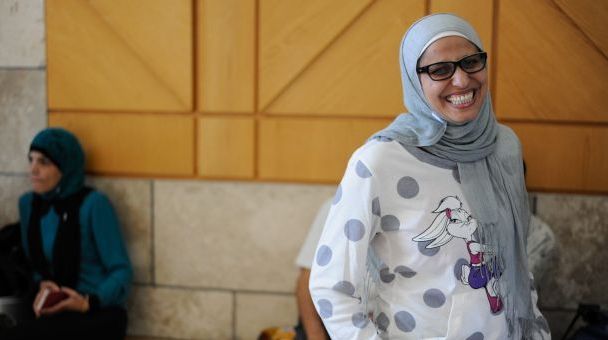 Poet Dareen Tatour – a Palestinian citizen of Israel – is currently standing trial on charges of ‘support for a terrorist organisation’ and several counts of incitement to violence in connection with her poetry and social media activity. After reviewing the charge sheet and the evidence against her, PEN has concluded that Dareen Tatour has been targeted for her poetry and activism and is calling for her immediate and unconditional release.

Tatour’s arrest at her home in Reineh, a small town near Nazareth, on 11 October 2015 came amidst a wave of violent attacks on Israeli citizens, and a corresponding crackdown by the Israeli authorities, which saw its officers given greater opportunity to open fire. She is currently under house arrest until the conclusion of her trial on charges of ‘support for a terrorist organisation’ (under articles 4(b) + (g) of the Prevention of Terror Ordinance-1948) and several counts of incitement to violence (under article 144(d) 2 of the Penal Code-1977).

On 3 October 2015, Tatour posted a video to YouTube in which she recites one of her poems entitled, ‘Qawim ya sha’abi, qawimhum (Resist, my people, resist them).’  In the video, the poem is set to music against a backdrop of video footage of Palestinian resistance – as men throw rocks at the Israeli military. At the time of her arrest, the video had been viewed a mere 113 times, according to news sources.

Tatour has argued that the entire case against her centres on a mistranslation of her poem, which she regards as a legitimate protest against crimes committed by Israeli settlers and soldiers occupying Palestinian land. The prosecution has reportedly petitioned the court not to allow Tatour’s defence team to present an alternative translation of the poem from Arabic into Hebrew.

Tatour also faces charges in connection with two Facebook posts. In the first, on 4 October, Tatour remarks upon an apparent call by Islamic Jihad – a banned terrorist organisation – to form a continuation of the intifada. She goes on to call for an intifada. The term intifada may broadly be understood as resistance. The second Facebook post to have aroused the suspicions of the authorities – dated 9 October 2015 – is a photograph of Isra’a Abed, a Palestinian citizen of Israel, who was shot by security officers while carrying a knife in a train station. Tatour reports that she did not believe at the time that Isra’a Abed was in possession of a knife on the basis of the photograph. The image reportedly appeared alongside Tatour’s profile photo which said ‘I will be the next martyr,’ in solidarity with others protesting the murder of 16-year-old Muhammad Abu Khdeir.

A hearing scheduled for 6 September 2016 was postponed after the translator declared a conflict of interest and withdrew, prolonging Tatour’s trial by a further two months. The next hearings are scheduled for 17 and 24 November 2016, during which time the defence is expected to make its case.

Share information about Dareen Tatour with friends and colleagues and on social media. Please use the hashtags #ImprisonedWriter and #FreeDareen

Messages of support can be sent via the following address:

Join PEN International’s Translation and Linguistic Rights Committee in translating her poetry, available in the original Arabic here and other languages here

Write to the Israeli authorities

Please copy your appeals to the Embassy of Israel in your country.  A list of embassies can be found here: http://www.allembassies.com/israeli_embassies.htm

Prior to her arrest, Dareen Tatour, aged 33, was a little known poet and photographer from the outskirts of Nazareth. In a recent interview, Tatour explained that she uses her poetry and photography as an outlet for her to express her feelings; her outrage and grief. She goes on to explain that although she posted her works online, they would rarely be viewed more than 20-30 times.

She writes of the need for Arab unity in the face of oppression, the absence of the Palestinian voice, and loss; she regularly makes references to those Palestinians who have been killed or have been the targets of violence. She is the author of The Last Invasion (2010).

On 30 September 2016, the Assembly Delegates of PEN International at the organisation’s , 82nd International Congress held in Ourense, Galicia, marked International Translation Day by translating and reading Tatour’s work. PEN Centres from around the world translated Tatour’s poem, A Poet Behind Bars, written on the day she received her indictment.