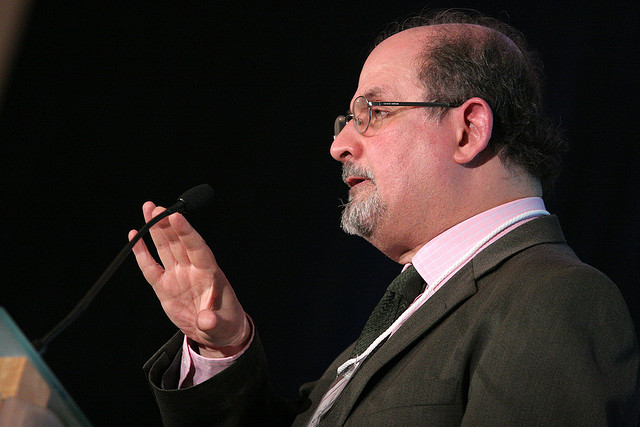 It has been announced that $600,000 has been put forward as a bounty to augment Ayatollah Khomeini’s 1989 death fatwa on the writer Salman Rushdie because of his novel The Satanic Verses. The spectre of a new financial reward being added to this longstanding threat is a craven attempt to fan the flames of religious extremism and hatred.

Rushdie, a former President of PEN America, a United States resident and a citizen of the United Kingdom, has lived for 27 years under an Iranian death warrant. Ayatollah Khomeini’s fatwa led to the killing of Hitoshi Igarashi, the Japanese translator of The Satanic Verses as well as other violent attacks.

Rushdie’s outspokenness and passionate defence of the freedom of threatened writers all over the world stand as an inspiration, and a daily reminder of what is at stake in defending free thought.

We call on Western governments that are now expanding relations with Tehran to insist that the Iranian government nullify its threat and bounty, disavow the fatwa once and for all, and uphold its international obligations to defend free speech.

The UK government must unequivocally condemn this latest attempt to revive the threat agaimst Salman Rushdie. It is an opportunistic attempt to renew a campaign of intimidation at a time of rapprochement with Iran and it is essential that the UK and the EU defend Rushdie from such an unacceptable and politically motivated attack.

Periodically there are attempts to draw new attention to the threats against Rushdie by those who want to capitalise on old passions to win new political gains. But these threats have proven no match for Salman Rushdie’s will to write, speak, and rise to the defence of other targeted writers. At a moment when they seek rapprochement with the world, Iran’s leaders must be pushed to make clear that such rhetoric has no place in their country.