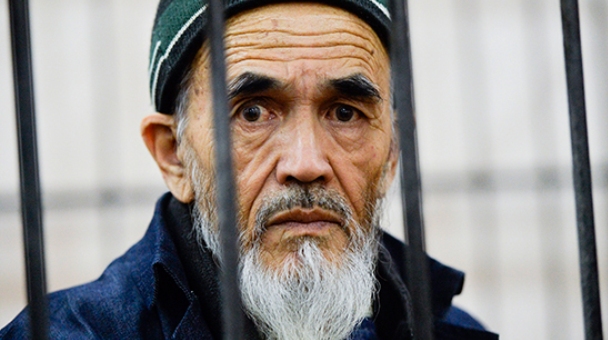 On 30 July 2019, a court in northern Kyrgyzstan upheld the life sentence of journalist and human rights activist Azimjon Askarov.

This trial was a mockery of justice and exposed once again Kyrgyzstan’s broken judicial system. According to reports, Azimjon Askarov was prevented from attending his own hearing, and even his lawyer was briefly denied access to the court.

UN experts have concluded that Azimjon Askarov had been arbitrarily detained, held in inhumane conditions, tortured and mistreated. Kyrgyzstan’s own human rights ombudsman exonerated him of complicity to murder charges. The PEN community and scores of human rights organisations have tirelessly been campaigning for his release. Yet he remains wrongfully imprisoned as his health deteriorates.

We urge the Kyrgyz authorities to quash the conviction and sentence of Azimjon Askarov and to release him immediately and unconditionally. He has already spent nine painful years in prison; he should not have to remain another day behind bars.

Please share information about Azimjon Askarov with friends and colleagues and on social media. #FreeAzimjonAskarov

A member of Kyrgyzstan’s Uzbek minority, Azimjon Askarov, 68, spent his career exposing corruption. He was arrested on 15 June 2010 during the inter-ethnic conflict that swept Osh and Jalal-Abad provinces in southern Kyrgyzstan, during which hundreds of people were killed. On 15 September 2010, Azimjon Askarov was found guilty of instigating ethnic hatred, inciting disorder and being complicit in the murder of a police officer.

An official investigation commissioned by the Kyrgyz government’s human rights ombudsman concluded that Azimjon Askarov was not at the scene prior to the police officer’s murder and, therefore, that he had played no role in the killing. In March 2016, the UN Human Rights Committee found that Azimjon Askarov had been arbitrarily detained, tortured, mistreated, and prevented from adequately preparing his defence as well as being denied treatment for serious medical conditions.

The PEN Community has been actively campaigning on Azimjon Askarov’s behalf, notably featuring his plight at PEN’s 80th International Congress in 2014 in Bishkek, Kyrgyzstan, and raising his case directly with both the President and General Prosecutor at the time.

On 12 July 2016, Kyrgyzstan’s Supreme Court ordered Azimjon Askarov’s retrial, only for the verdict to be upheld on 24 January 2017. His case was given a new hearing after changes to Kyrgyzstan’s Criminal Code came into force in January 2019. The Chui regional court in northern Kyrgyzstan upheld once again his life sentence on 30 July 2019.

According to one of his lawyers, Azimjon Askarov’s health has seriously deteriorated the past few months and he has been denied access to adequate medical care.

PEN calls once again for his immediate and unconditional release. For more information about PEN’s campaign to date please click here.