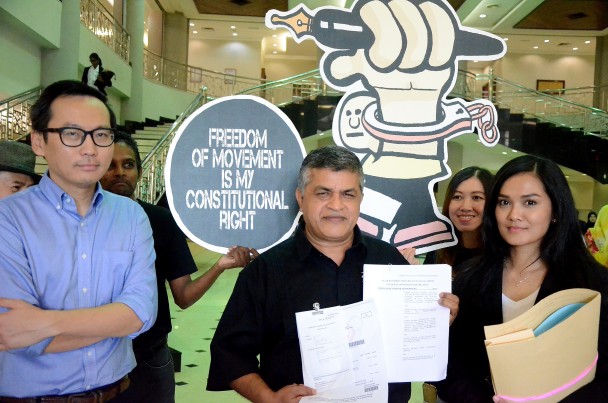 English PEN is urging the Malaysian authorities to drop all charges and end the harassment against cartoonist Zunar for peacefully exercising his right to free expression. Already facing nine counts of sedition and subject to travel restrictions, Zunar was again arrested on 26 November 2016 and placed under investigation for alleged violations of the Sedition Act and penal code.

On 26 November 2016, police arrested Zunar at the George Town Literary Festival in Penang and placed him under investigation in connection with violations of the Sedition Act and the Penal code, according to news reports. He reports that 20 of his drawings have been confiscated by the police. Zunar was released on bail the following day, but is required to report to police in Penang on 27 December for further investigation. Concerns remain that he may soon be charged with his tenth count of sedition in connection with his cartoons.

Zunar’s arrest came a day after he was assaulted by a pro-government mob, forcing him to call off his exhibition in Penang. In a statement, Zunar said that some 30 men stormed the public exhibition and proceeded to verbally abuse and physically attack him, as well as vandalise some of his artworks.

Zunar is already facing nine counts of sedition in connection with a series of tweets. Arrested on 10 February 2015, Zunar was held for three days for a series of tweets and a cartoon published in February 2015, in which he had questioned the trial of opposition leader Anwar Ibrahim.  He believes the trial and five-year imprisonment of Ibrahim were used to stop the politician from contesting the general election scheduled for 2018. ‘The lackeys in black robes are proud of their sentence. The rewards from the political masters must be plenty,’ Zunar wrote in one of his tweets. A month later, Zunar was charged with nine counts of sedition for the tweets. His trial, which has been subject to several delays, is expected to commence on 24 January 2017. If found guilty, Zunar could spend up to 43 years in prison.

It is important to remember that Zunar is a cartoonist, a man with passionate views on Malaysian politics and society, and he has every right to express his views, which he has done so peacefully for over four decades. The response of the Malaysian state, which is charging him with sedition, is outrageously disproportionate.

The upcoming trial is the culmination of many years of harassment, persecution and censorship of Zunar and his associates.  Between 2009 and 2010, the Home Minister for Malaysia banned five of his books claiming they were detrimental to public order. In September 2010, Zunar was arrested and detained for publishing his book Cartoon-O-Phobia. In November 2014, those connected with the production and sale of his cartoon books were raided, arrested and questioned under the sedition laws. In addition, the online payment gateway that manages the financial transactions of his website zunar.my, was forced to release the details of people who purchased his books.

In October this year, the Malaysian authorities imposed restrictions preventing Zunar from travelling abroad ahead of his trial. On 7 December, Zunar filed a legal suit challenging the ban Zunar, stating:

The grounds of the challenge are that there is no reason given by the authorities for the travel ban, and there is no court order barring me from leaving the country. Hence, this arbitrary banning is an abuse of power and a breach of natural justice and the Federal Constitution. The court is expected to set a date for the trial soon

The 1948 Sedition Act in Malaysia stems from the days of British colonial rule which ended in 1957. According to Tripathi:

Sedition laws are a sad legacy of the colonial era that many countries that were former British colonies continue to use against political opponents, and Malaysia is no exception. We reiterate our call on Prime Minister Najib to withdraw all charges against Zunar and all others charged with sedition, in keeping with his 2012 campaign pledge, that he would abolish the Sedition Act.