Skip to content
Home > Campaigns > Not in our name: World Press Freedom Day

Not in our name: World Press Freedom Day 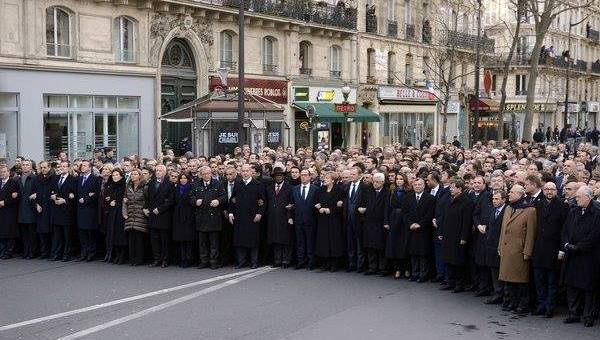 On World Press Freedom Day, 116 days after the attack at the office of the satirical newspaper Charlie Hebdo that left 11 dead and 12 wounded, we, the undersigned, reaffirm our commitment to defending the right to freedom of expression, even when that right is being used to express views that we and others may find difficult, or even offensive.

The Charlie Hebdo attack – a horrific reminder of the violence many journalists around the world face daily in the course of their work – provoked a series of worrying reactions across the globe.

In January, the office of the German daily Hamburger Morgenpost was firebombed following the paper’s publishing of several Charlie Hebdo images. In Turkey, journalists reported receiving death threats following their re-publishing of images taken from Charlie Hebdo. In February, a gunman apparently inspired by the attack in Paris, opened fire at a free expression event in Copenhagen; his target was a controversial Swedish cartoonist who had depicted the prophet Muhammad in his drawings.

But many of the most disturbing reactions – and the most serious threats to freedom of expression – have come from governments.

A Turkish court blocked web pages that had carried images of Charlie Hebdo’s front cover; Russia’s communications watchdog warned six media outlets that publishing religious-themed cartoons ‘could be viewed as a violation of the laws on mass media and extremism’; Egypt’s President Al-Sisi empowered the prime minister to ban any foreign publication deemed offensive to religion; the editor of the Kenyan newspaper The Star was summoned by the government’s media council, asked to explain his ‘unprofessional conduct’ in publishing images of Charlie Hebdo, and his newspaper had to issue a public apology; Senegal banned Charlie Hebdo and other publications that re-printed its images; in India, Mumbai police used laws covering threats to public order and offensive content to block access to websites carrying Charlie Hebdo images. This list is far from exhaustive.

Perhaps the most long-reaching threats to freedom of expression have come from governments ostensibly motivated by security concerns. Following the attack on Charlie Hebdo, eleven interior ministers from European Union countries including France, Britain and Germany issued a statement in which they called on Internet service providers to identify and remove online content ‘that aims to incite hatred and terror.’ In the UK, despite the already gross intrusion of the British intelligence services into private data, Prime Minister David Cameron suggested that the country should go a step further and ban Internet services that did not give the government the ability to monitor all encrypted chats and calls.

On World Press Freedom Day, we, the undersigned, call on all Governments to:

Adil Soz – International Foundation for Protection of Freedom of Speech

Center for Media Freedom and Responsibility

Institute for the Studies on Free Flow of Information