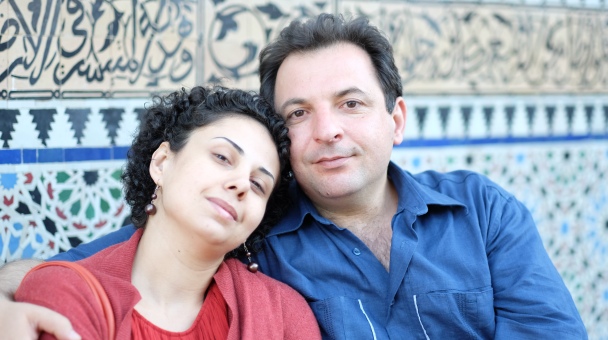 Journalist and lawyer Mazen Darwish was released from prison last August, after three years in detention in Syria. Founding director of the Syrian Centre for Media and Free Expression (SCM), and a leading human rights activist, he was subjected to torture and enforced disappearance.

His wife, the journalist and activist Yara Bader, led the campaign for Mazen Darwish’s release. In 2015, Human Rights Watch awarded her the Alison Des Forges Award for Extraordinary Activism.

In 2014, Salman Rushdie chose Mazen Darwish as the recipient of the PEN Pinter Prize for an international writer of courage. In his acceptance speech, smuggled out of Adra Prison, Mazen Darwish called for a new social contract that ‘frees Syria from tyranny … cleanses her soil of terrorism, and saves our children from the perils of sectarianism’.

English PEN and our colleagues at PEN International are honoured to be hosting Mazen Darwish and Yara Bader on their first trip to the UK.

Mazen Darwish and Yara Bader will join the writer and artist Zaher Omareen for a discussion on free speech, culture and resistance with the BBC’s Razia Iqbal.

Hosted by English PEN and PEN International, with thanks to Citadel Festival

Mazen Darwish and Yara Bader will talk about their experience of the uprising in Syria and their fight for the protection of human rights in a discussion chaired by English PEN Director Jo Glanville.

NB Members of the public should enter via the Cromwell Green entrance, (8) on this map. Please arrive 20 minutes early to allow for queues at security.