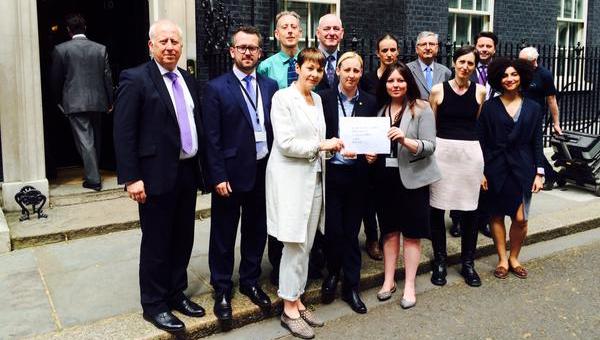 Thank you to everyone that joined us for this week’s Day of Action for Raif Badawi, and to all those that continue to attend our regular vigils outside the Saudi Embassy here in London.
On 17 June, more than 50 supporters gathered in Whitehall where our director Jo Glanville was joined by comedian Kate Smurthwaite, activist Peter Tatchell and a cross-party group of MPs and peers to deliver a letter to David Cameron. We also had a great turnout for our evening event at Portcullis House, where we were again joined by Green Party leader Natalie Bennett, Stewart McDonald MP of the SNP, and Labour’s Sarah Champion MP, all of whom pledged their ongoing support to Raif Badawi and his lawyer and brother-in-law Waleed Abulkhair. Stewart McDonald has already done as promised, asking the Leader of the House for an unequivocal statement calling for Raif Badawi’s release. Meanwhile, our mass social media message reached over 1 million people.

It seems that the ongoing campaign is finally beginning to take its toll. Last Friday, 12 June, the Saudi Embassy in London finally released a statement, declaring that it has

no tolerance for foreign entities meddling in the Kingdom’s internal affairs. The Kingdom will not tolerate such outrageous, ridiculous interference in its sovereign criminal justice system.

Whilst the statement unequivocally condemns ‘foreign parties intruding into its internal affairs’ it also suggests that the authorities are not entirely impervious to pressure. But there is still a very long way to go.

Since the first 50 lashes in January 2015, Raif Badawi has not been flogged again. Crucially, since the Supreme Court upheld the draconian sentence against him earlier this month, the floggings have not resumed. It is widely believed that this is a result of the ongoing protests around the world.

Whilst we welcome the news that he has not been flogged today, we are demanding a conclusive end to the threat of further lashes. However, if further floggings do go ahead, we must be in a position to take immediate action.

With that in mind, we are gathering the names and contact details of organisations and individuals who would be willing to join a mass protest outside the Saudi Embassy in London in the event that Badawi receives further lashes. We hope that the threat of such an action will make the Saudi authorities aware of the level of outrage such punishment will cause.

Any such protest would be held in the afternoon on the day after Raif Badawi is flogged, in order to allow those from outside London to join us. If you are prepared to consider joining a protest at short notice, please provide us with your details.

We will also be continuing to organise regular vigils outside the Saudi Embassy in London on the last Friday of every month. The next one will be taking place on Friday, 26 June. Join us.

You can help the campaign further by sharing these articles on social media. #freeraif #freewaleed