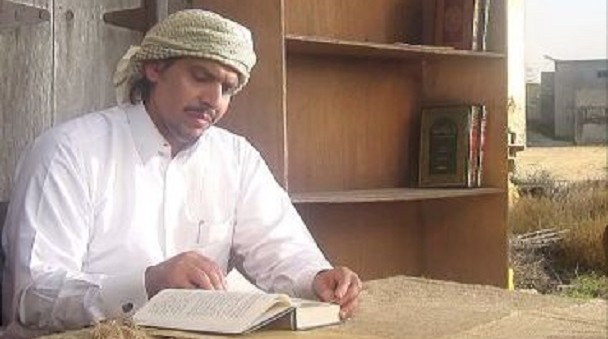 On the third anniversary of the unfair 15-year prison sentence handed down to the Qatari poet Mohammed al-‚ÄòAjami, the human rights bodies Americans for Democracy and Human Rights in Bahrain (ADHRB), Amnesty International, English PEN, Freedom Now, PEN International and Split This Rock renew longstanding calls for his immediate and unconditional release.

On 25 February 2016, the human rights groups will deliver petitions signed by thousands of people around the world to Qatari embassies, chiefly in Washington DC and London, UK, to renew their appeal for the immediate and unconditional release of the poet.

Today, we deliver thousands of signatures to Qatari officials in London and Washington, DC. These petitions represent the voices of people around the globe, saying loudly and forcefully that poetry that does not incite violence or hatred is not a crime. We implore the Emir of Qatar to hear our message and release Mohammed al-‚ÄòAjami.

Mohammed al-‚ÄòAjami is serving a 15-year sentence in the Central Prison, in Doha, simply for writing and reciting a poem considered critical of the ruling family.

Al-‚ÄòAjami was arrested in Qatar in November 2011 after a recital of his work ‘The Cairo Poem’, performed in his apartment in Cairo, Egypt, more than a year earlier, was recorded and uploaded to YouTube without his knowledge. The poem was deemed to be insulting to the Emir and al-‚ÄòAjami was tried on charges including ‚Äòpublicly inciting to overthrow the ruling system‚Äô and ‚Äòpublicly challenging the authority of the Emir‚Äô.

Mohammed al-‚ÄòAjami faced an unfair trial. Following his arrest, the Qatari authorities held Mohammed al-‚ÄòAjami in incommunicado for three months before he was allowed visits from his family and lawyer. Despite petitions to the judge about his treatment, throughout the pre-trial investigations he was held in solitary confinement in a very small cell, in which he could not lie down without pressing against the lavatory.

The human rights organisations understand that, during this time in solitary confinement, interrogators forced al-‚ÄòAjami to sign a document later relied upon for his conviction. It stated, falsely, ‘The poem was read in a public place in the presence of the press’. The lawyer of Mohammed al-‚ÄòAjami asserted to the court that this was not true and that the poem was recited only in private.

Mohammed al-‚ÄòAjami‚Äôs trial before the Doha Criminal Court was held in secret without any explanation and despite his lawyer‚Äôs objections and complaints. In violation of the principle of the independence of the judiciary ‚Äì which requires that officials with judicial functions are completely autonomous from those responsible for prosecution – the judge presiding over Mohammed al-‚ÄòAjami‚Äôs case had also conducted the pre-trial investigation. The presiding judge rejected objections in relation to this, prevented al-‚ÄòAjami from being represented by his lawyer and the court imposed another lawyer upon the poet.

On 29 November 2012, Mohammed al-‚ÄòAjami was sentenced to life imprisonment. On 25 February 2013, the sentence was reduced on appeal to 15 years‚Äô imprisonment.

In May 2014, speaking during the Universal Periodic Review, a state-led human rights review conducted at the United Nations, a US diplomat called on Qatar to ‘Release all prisoners of conscience, including the poet Mohammed al-‚ÄòAjami, and respect the rights of all individuals to freedom of expression’. In June 2014, the government of Qatar rejected the criticism, stating that it ‘believed in freedom of expression’, adding that: ‘All measures taken against the poet Mohammed al-‚ÄòAjami were consistent with international rules. Mr. al-‚ÄòAjami had been given a fair trial and allowed to appeal the judgement to the Court of Appeal and the Court of Cassation.’

In addition to the fact that the Qatari government has imprisoned Mohammed al-‚ÄòAjami for nothing more than reciting poetry ‚Äì a clear infringement of his right to free expression under international law ‚Äì UN experts have also found that his trial was rife with due process violations. If Qatar truly respects freedom of expression, it should back up its rhetoric by immediately releasing Mohammed al-‚ÄòAjami.

In a joint statement issued on 20 October 2015, three UN human rights experts called for the release of Mohammed al-‚ÄòAjami, noting that: ‘The grounds and legal provisions provided by the authorities to justify the arrest and sentence of Mr. al-Ajami are contrary to the Universal Declaration of Human Rights’. They stated that penalising criticism of state figures ‘is [‚Ä¶] incompatible with international standards, which protect the right to freedom of opinion and expression, including in the form of arts, and to take part in cultural life.’

It is tragic and absurd that Mohammed al-‚ÄòAjami has been languishing in prison for more than four years simply for reciting a poem. His arbitrary imprisonment and ludicrous 15-year sentence are the shameful result of the Qatari authorities‚Äô inability to tolerate criticism and their disregard for the right to freedom of expression.

Addressing the UN General Assembly in September 2015, the Emir of Qatar told the international community that his country is protecting and promoting human rights by ‘pursuing an approach based on the rule of law, transparency, justice and human dignity.’

The arrest and imprisonment of Mohammed al-‚ÄòAjami runs contrary to the statements made by the Qatari government and the progressive image it is projecting before the 2022 World Cup. We hope these petitions will send a clear message that the world is closely watching Qatar‚Äôs actions.

For a summary of the case, see the November 2015, Amnesty International report, I‚Äôm Nothing But a Prisoner

More information about the event in the UK

More information about the event in Washington DC