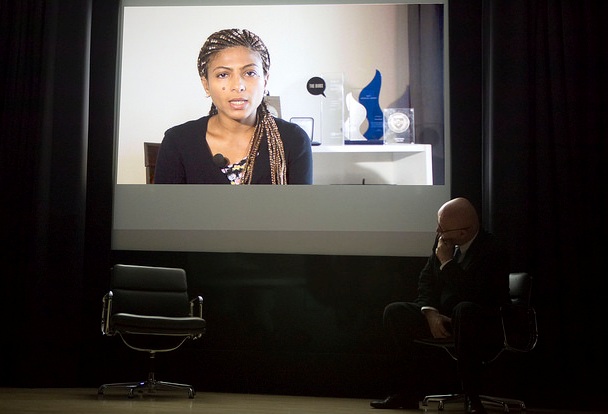 Last Tuesday (6th October) English PEN was proud to give Saudi blogger Raif Badawi the PEN Pinter International Writer of Courage Award, the sixth writer to receive the honour. Badawi was chosen by the British poet James Fenton, who said that what moved him was

the contrast between the simplicity of Badawi’s liberal aims – their modesty, almost – and the ferocity of the punishments they have brought down on him.

The ‘ferocious’ punishments include 1000 lashes, ten years in prison, a hefty fine and a travel ban.

The following day, I was asked to speak about the Badawi case on the BBC World Service. Also commenting were some Saudi journalists – some based in the country and others writing from the UK. One of the journalists lamented the fact that Badawi was a blogger and not a journalist with an editor.

Usually… you have an editor above you, and above him an editor-in-chief, you have somebody who knows what the red lines are, you have someone who guides you and tells you ‘hey, this might get you in trouble’. They give you advice. And this is where the danger with blogging in Saudi Arabia comes in, because you don’t have someboday above you who is advising you on what to do.

This was the pragmatic view of someone who has to work in the constrained conditions of an absolute monarchy.

The problem with this approach is where the ‘red lines’ are drawn. In Saudi Arabia (said my interlocutor) this means no criticism of the Royal Family or of religious figures. But since the country is ruled directly by the Royal Family to a strict Islamic code, this in effect means that politics and the decisions of Government are immune to media scrutiny! This does not make for good governance. It stunts political progress and cultural development, and creates an environment where corruption can flourish.

In such situations, the fact that bloggers do not have editors is a feature, not a bug of the medium. The author’s thoughts are transmitted into the post and onto the world, untroubled by an editor’s eye. Blogging allows anyone to challenge people in power.

Blogging is the raw cane sugar of politics. Words may be refined into poetry or prose, but with each of these mediated forms, there is a danger that something important is lost in the process of editing. In authoritarian states, this often means that the truth is obscured or simply ignored. In such cases, a blog may be the only thing that cracks the brittle facade that presidents and kings offer up as reality to their people.

No wonder, then, that around the world, bloggers are on the front line of free speech and bear the brunt of state censorship. Raif Badawi is in prison in Saudi Arabia. Ali Abdulemam is a refugee from Bahrain. Hossein Derakhshan spent six years in Iran’s notorious Evin Prison. Alaa Abd El-Fattah was the subject of one of the first online campaigns by bloggers for bloggers, back in 2006, after he was detained by Hosni Mubarak’s regime. He was arrested during the Arab spring protests in 2011, and again in 2013 during the tenure of Mohamed Morsi. In February of this year, under the rule of the current president Abdel Fattah el-Sisi, Alaa was charged with ‘inciting an unauthorised demonstration’ and sentenced to five years in prison. Nineteen year-old Tal al-Mallouhi was sentenced to five years in prison in Syria in 2011, accused of ‘spying’ based on the so-called ‘evidence’ available on her public blog. Her whereabouts is currently unknown.

English PEN is proud to be one of the Editorial Partners for this year’s Blog Action Day. Find out more here, by visiting the Blog Action Day website, and by following #RaiseYourVoice #FreeToWrite on Twitter.