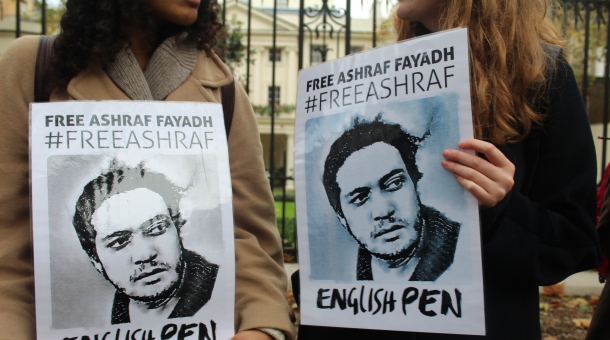 A court in Saudi Arabia has overturned the death sentence handed down to the Palestinian poet Ashraf Fayadh.

However, English PEN is shocked to learn that Fayadh’s conviction for apostasy has not been reversed, and the court has ordered a harsh new punishment.

According to a report in the Guardian, Fayadh’s sentence for apostasy will be 8 years in prison, 800 lashes, a fine of 50,000 Saudi Riyals, and a public apology.  He will also be forced to renounce his poetry on Saudi television.

It is a relief that Ashraf Fayadh no longer faces execution, but this is a wholly disproportionate and shocking sentence. It will cause dismay around the world for all Ashraf’s many supporters. The charges against him should have been dropped and he should be a free man today. We will continue to campaign for his release.

Fayadh is a poet, artist, curator and a member of the British-Saudi art collective organisation Edge of Arabia. He was first detained in August 2013, in relation to his collection of poems Instructions Within. He was released on bail but rearrested in January 2014. Although charges of apostasy were dropped at that time, he was nevertheless sentenced to four years in prison and 800 lashes on various blasphemy related charges.

However, in November 2015 a judge reversed the previous ruling and sentenced Fayadh to death.  It is this sentence which has today been overturned.

Last month, English PEN co-hosted a reading for Ashraf Fayadh with the Mosaic Rooms in London.  Readers included Hassan Abdulrazzak, Selma Dabbagh, Peter Kennard, AL Kennedy, Ruth Padel and Stephen Watts.  The event was part of a worldwide reading for Ashraf Fayadh, with events held on every continent – PEN Myanmar, PEN Boliva and PEN Kenya were among the international organisations that hosted readings. Fayadh’s words were also read from the floor of the House of Lords.