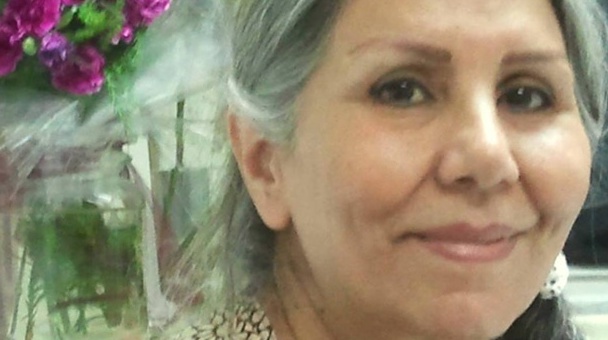 Beyond those gates, another world, another race,
a people poisoned and oppressed by woe;
they stared wearily at us, the prisoners we faced,
with sunken eyes, lack-lustre, circled with sorrow

– Extract from ‘From Evin to Raja’I Shah’ in Prison Poems, published in English on 1 April 2013.

Teacher and poet Mahvash Sabet is currently serving a 20-year prison sentence in Evin prison, Tehran. She is one of a group of seven Bahá’í leaders known as the ‘Yaran-i-Iran’  (‘Friends of Iran’) who have been detained since 2008 for their faith and activities related to running the affairs of the Bahá’í community in Iran. Mahvash Sabet began writing poetry in prison, and a collection of her prison poems was published in English translation on 1 April 2013.

English PEN and our colleagues around the world have been doing what we can to support Mahvash Sabet and her family throughout her time in detention. PEN centres around the world are using this year’s International Women’s Day to highlight her case, urging our members and supporters to read and share her work; to send her a message of support or even a book; and to write to the Iranian authorities calling for her immediate release.

These acts of solidartiy, though small, can mean a great deal. Last year, English PEN supporter Michelle Varney parcelled up a book for Mahvash Sabet as part of our annual World Book Night initiative. Months later, she received a reply from Mahvash Sabet’s cousin Bijan:

I was struck dumb. This was humbling. I had done nothing. Nothing apart from think of someone and send a book in a throw-away gesture. But to Mahvash who received it and Bijan who worries about her it meant so much more. It brightened their lives. It meant that no matter what their plight and wherever they were, someone cared and had remembered them.

In an email to English PEN, Bijan further explained how much such actions and activities can mean:

Thanks very much for taking the time to write to me and convey all the great news about the various initiatives you and your colleagues are taking to keep the memory of Mahvash alive and also to give her and our family hope. We are all deeply grateful and truly appreciate what PEN International and its various chapters have already done and continue to do for Mahvash.

English PEN will be continuing to campaign for Mahvash Sabet’s release throughout 2016. She is among the international writers to be featured at the inaugural English PEN Modern Literature Festival in April 2016, for which she has been paired with the writer Emily Critchley. She will also be among the poets highlighted as part of our Poetry as Protest initiative with Ledbury Poetry Festival in July 2016.

Leader of the Islamic Republic

It is also recommended that you send a copy of your appeals via the diplomatic representative for Iran in your country. Contact details for embassies can be found here.