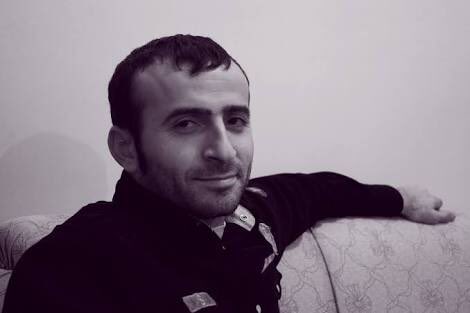 On 18 September 2018, Hanifi Bariş, lawyer and academic at the University of Aberdeen, attended his first hearing at Istanbul’s Çağlayan Courthouse. Barış was among the signatories of the Academics for Peace petition and one of many to have faced charges as a result. Detained in early July, where he was seized after reporting to a station for a statement, Barış is charged with ‘posting items of criminal content’ on social media.

Ahead of the hearing, a protest was held outside the courthouse, attended by a large number of his colleagues and academics. Some of them have never met Barış but regularly attend the hearings of fellow academics in order to show their solidarity and support. Among them was  People’s Democratic Congress (HDK’s) co-spokesperson Onur Hamzaoğlu, who was himself released after five months in detention in July 2018. International observers from English PEN and Amnesty International’s Turkey office were also in attendance.

Bariş arrived from Silvri prison, accompanied four prison guards for his first hearing after more than two months in detention. His statement showed his disbelief at the treatment he had received:

I am in awe of the horrors of such a case as this… I did not think the posts I shared were a crime requiring a defence.

The charges against Barış, who specialises in political theory with a particular focus on Kurdish issues, relate to academic articles he had shared on social media websites. Accompanying images that occur automatically when an article is shared on social media websites were also cited as evidence against him. Barış stated in his defence that the articles were purely of academic interest and all published by ‘reputable international news organisations’ such as The Guardian and The Washington Post. He himself wrote none of them, nor did he add any personal commentary when sharing them.
His defence lawyer Mehmet Doğan stated:

For shared posts, he has been deprived of his liberty for two and a half months. The latest share in the evidence file was made in 2017, he hasn’t posed a threat since [before his July 2018 arrest due to being a ‘flight risk’].

He added he has few followers and largely posted in English. The police case built against him was criticised for its ‘open source’ method of collection, while suggestions that he was a representative for Kurdish militia were strongly rejected.

Following the short hearing, the prosecutor requested that the defendant be released. A recess was called to allow the judges to deliberate the decision, after which Barış was taken back into the courtroom in handcuffs through the crowd of his family and friends.

The head judge requested for no applause to be given by the public before he announced the release of Barış, with additional measures of an international travel ban and weekly check-ins with the police. The proceedings remain ongoing and the next hearing is scheduled to take place on 13 December 2018. In the meantime, Barış will be unable to return to his work in Aberdeen, but his colleagues have nevertheless expressed relief on social media that he is no longer in prison, while Barış himself has thanked supporters in a video posted on social media.

A message for you all from our dear friend and colleague @aberdeenuni Dr Hanifi Baris Thank you so much for all your support with our #FreeHanifi campaign. In love and solidarity. pic.twitter.com/AzGtMrMhyS