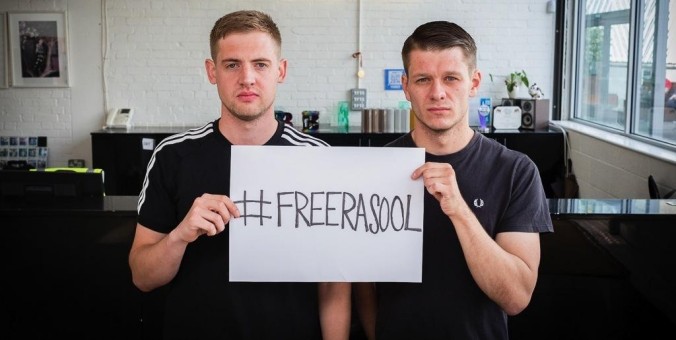 Today marks one month since the arrest of VICE News team Jake Hanrahan, Philip Pendlebury and Mohammed Ismael Rasool, in Turkey. Hanrahan and Pendlebury have since been released and returned to the UK but Rasool remains detained.

On 27 August, the three VICE News journalists were detained by police along with a fourth member of their team as they filmed in the south-east region of Diyarbakir. Police interrogated them about alleged links to Islamic State and Kurdish militants. The fourth member of the team was released shortly afterwards.

On 30 August, English PEN joined colleagues from PEN American Center, PEN International and PEN Turkey to issue a statement of concern calling for the immediate and unconditional release of the journalists. Jo Glanville, Director of English PEN, described the arrests as ‘unacceptable harassment of journalists who are fulfilling an essential role reporting on events of public and international interest.’

On 1 September, the Turkish government charged the three journalists, who were being held in custody, with ‘working on behalf of a terrorist organisation’. In response, English PEN joined Index on Censorship in writing to Foreign Secretary Philip Hammond MP, to ‘urge the immediate intervention of the British government in the case of three VICE News journalists, including two Britons, who have been charged with terror offences by the Turkish government.’ The letter called for consular assistance to the VICE News team and urged the Foreign Secretary ‘to make a public statement in defence of freedom of expression in Turkey.’ We also raised the case with the EU and with the Council of Europe, of which Turkey and the UK are members.

The following day, 2 September, the Foreign Office issued a statement declaring that they ‘would expect the Turkish authorities to uphold the obligations enshrined in [international] agreements.’ A day later, after six days in detention, both Jake Hanrahan and Philip Pendlebury were released but their colleague 24-year-old Mohammed Ismael Rasool remained detained.

While we are grateful that they have been freed, we are deeply worried by reports that our other Vice News colleague, Mohammed Ismael Rasool, has had his appeal of release rejected by the Turkish government. Rasool is an experienced journalist and translator who has worked extensively across the Middle East with Vice News, Associated Press and Al-Jazeera.

Following their release from custody, the two British journalists were transferred to a deportation centre. Three days later they were returned to the UK. Shortly afterwards, Hanrahan described the moment they learned they were to be released but that Rasool was not:

Without warning, our cell door swung open. Two guards pointed at Phil and I and said a few words in Turkish.

‘What are they saying?’ I asked Rasool.

Rasool paused. His face dropped. ‘You two are free to go,’ he replied.

It took a second to process. Both Phil and I were being released, but Rasool was being forced to stay in prison. My heart sank. It was unfair. The whole thing was unfair, but this was a particular stake to the heart.

‘Wait a minute,’ Phil said to the guards. They were having none of it. We had to leave at once.

I wrapped my arms around Rasool and promised him that no matter what, we would fight until he was released. Phil did the same.

‘Get me out of here guys,’ Rasool said as we were led away.

As promised, both journalists and their colleagues at VICE News are now focused on ensuring Rasool’s release.

More than 70 writers from around the world have joined PEN in sending an open letter to President Erdoğan calling for the immediate release of Mohammed Ismael Rasool. We have yet to receive a response. We are also inviting members around the world to show their concern for Mohammed Ismael Rasool on social media, by writing directly to the Turkish authorities, and by sending messages of support.