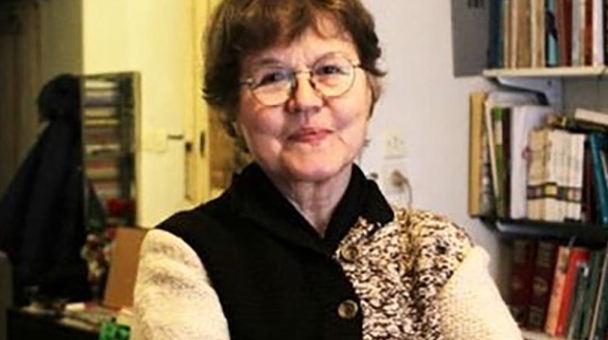 English PEN is deeply concerned by the ongoing detention of renowned writer and linguist Necmiye Alpay.  Arrested on 31 August on terror charges as a part of an ongoing investigation into closed daily Özgür Gündem, Alpay is currently being held in Bakırköy Prison along with fellow writer Aslı Erdoğan.

On 31 August, Istanbul’s Eighth Criminal Court of Peace ordered the arrest of Alpay on charges of being a member of a terror organisation and disrupting the unity of the state; she denies all charges against her.

In September 2016, Necmiye Alpay sent the following letter to PEN, detailing the apparent reasons for her arrest and thanking :

Years ago, when some writer friends of mine proposed to add my name to a symbolic Advisory Committee which would figure at a corner of the newspaper Özgür Gündem, I accepted in order to support the freedom of expression of this newspaper, which really needed it, having long been a target of prosecutions, prohibitions and even a bombed attack. At that moment, no probability of being arrested for giving my name did not cross my mind at all.

Years passed, and first a prominent writer, Aslı Erdoğan and then me, on 1st September, have been arrested and jailed, accused of being member of a terrorist organisation. Our names on the last page of Özgür Gündem were the only evidence for this. No provision of any law exists on this. The prosecution says that this newspaper is an organ of PKK, and us, six persons listed as Advisory Committee must be part of that. This is the logic! In fact, we did not even see each other with some of these six persons, and the Committee never had a meeting, this was not the purpose. I explained all these to the prosecutor as did Aslı Erdoğan, who is a first rang (sic) writer, rather witnessing in her writings the violations of human rights. She is published in 24 languages. Myself, member (only!) of The Peace Foundation, my endeavour has always been to help a peaceful solution to the Kurdish problem.

What I know is that the actual way of prosecuting everyone is not the way to restore a peaceful country, neither that of combatting terrorism. I call all those who are responsible, and the government, to put an end to the politics of violence and repression, free writers and peace activists, recognise the right of criticism, begin to talk and negotiate with the representatives of Kurdish movements who declare themselves ready for that. Jailing peace activists and writers is not new in our country. Interestingly enough, now there are more women writers and peace activists in prison than ever. And, this time, considering the problems of the region, we risk to find us in a civil war, and our country fallen apart. Only peaceful politics can serve [to] avoid this.

Thank you for all your interest.

Journalism is not a crime.

PEN believes that Alpay is being held solely for her peaceful exercise of her right to freedom of expression and is calling for her immediate and unconditional release.

Please share details of Necmiye Alpay’s detention with friends and colleagues and on social media. #NecmiyeAlpay

Send messages of support and books

Send messages and postcards of solidarity and support to Necmiye Alpay in prison at the following address:

Please also take a photo of your postcard and share on social media with the hashtag #yazarimadokunma (don’t touch my author).

Send appeals to the Turkish authorities:

Please send us copies of your letters or information about other activities and of any responses received.