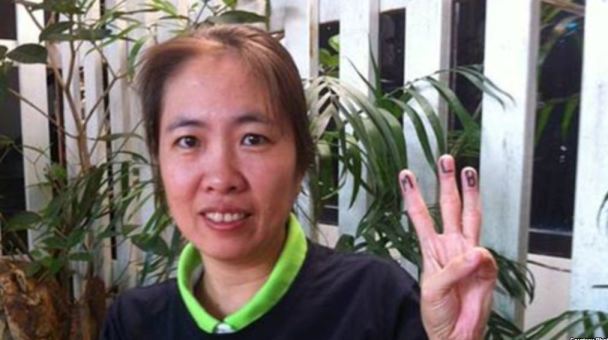 English PEN welcomes the news that blogger Nguyen Ngoc Nhu Quynh, known by her pen name Me Nâm (Mother Mushroom) has been released and reunited with her family.

Arrested in October 2016, Me Nâm was sentenced the following year, after a one-day trial, to ten years in prison on charges of ‘conducting propaganda against the Socialist Republic of Viet Nam’. She was released on 17 October 2018 having spent two years in detention. The remainder of her 10-year prison sentence has reportedly been suspended.

Following her release, Me Nâm travelled to the United States with her family where she was greeted by a large crowd of supporters at the airport and declared that she would ‘never keep silent‘, adding ‘I will continue to raise my voice until there is human rights in Vietnam, real human rights’.

While the news of Me Nâm’s release is hugely welcome, we are saddened that she had already spent two years too many behind bars and that, like many others before her, she has been forced into exile. We also remain seriously concerned for the many other writers and activists serving lengthy prison sentenced in Vietnam and continue to call on the authorities to stop the crackdown on peaceful dissent.

While PEN is hugely relieved that Mother Mushroom has been released, it is still unacceptable that she spent two years of her life behind bars. We mustn’t be complacent about Viet Nam’s increasing crackdown on dissidents or worsening human rights record. We hope that she and her family are able to receive the support they need to rebuild their lives in a new country.

PEN has campaigned for Me Nâm throughout her detention, including at our annual English PEN Modern Literature Festival where writer Helen Palmer performed a piece in solidarity with the imprisoned blogger. On learning of her release, Palmer said:

I am delighted to hear this wonderful news, having learned about Me Nâm’s predicament when I joined English PEN. I was shocked and saddened to hear about her situation after the inspiring work she had been doing, and besides raising awareness and speaking for her I had felt quite powerless. I am extremely happy to hear that Me Nâm has been released after her long and unjust period of captivity, and wish her happiness in her freedom and in being reunited with her family.

Thank you to everyone who has taken part in actions on behalf of Me Nâm and please do continue to show your support for her and other colleagues detained in Vietnam. #StopTheCrackdownVN

· Welcoming the release of blogger and government critic Nguyen Ngoc Nhu Quynh on 17 October 2018, but deploring that her release was conditional on her forced exile and a suspended prison sentence;
· Calling on the Vietnamese authorities to allow Nguyen Ngoc Nhu Quynh to return freely to Viet Nam;
· Calling for the immediate and unconditional release of all other writers and activists imprisoned or detained for the peaceful exercise of their right to freedom of expression in accordance with Article 19 of the ICCPR, to which Viet Nam is state party.