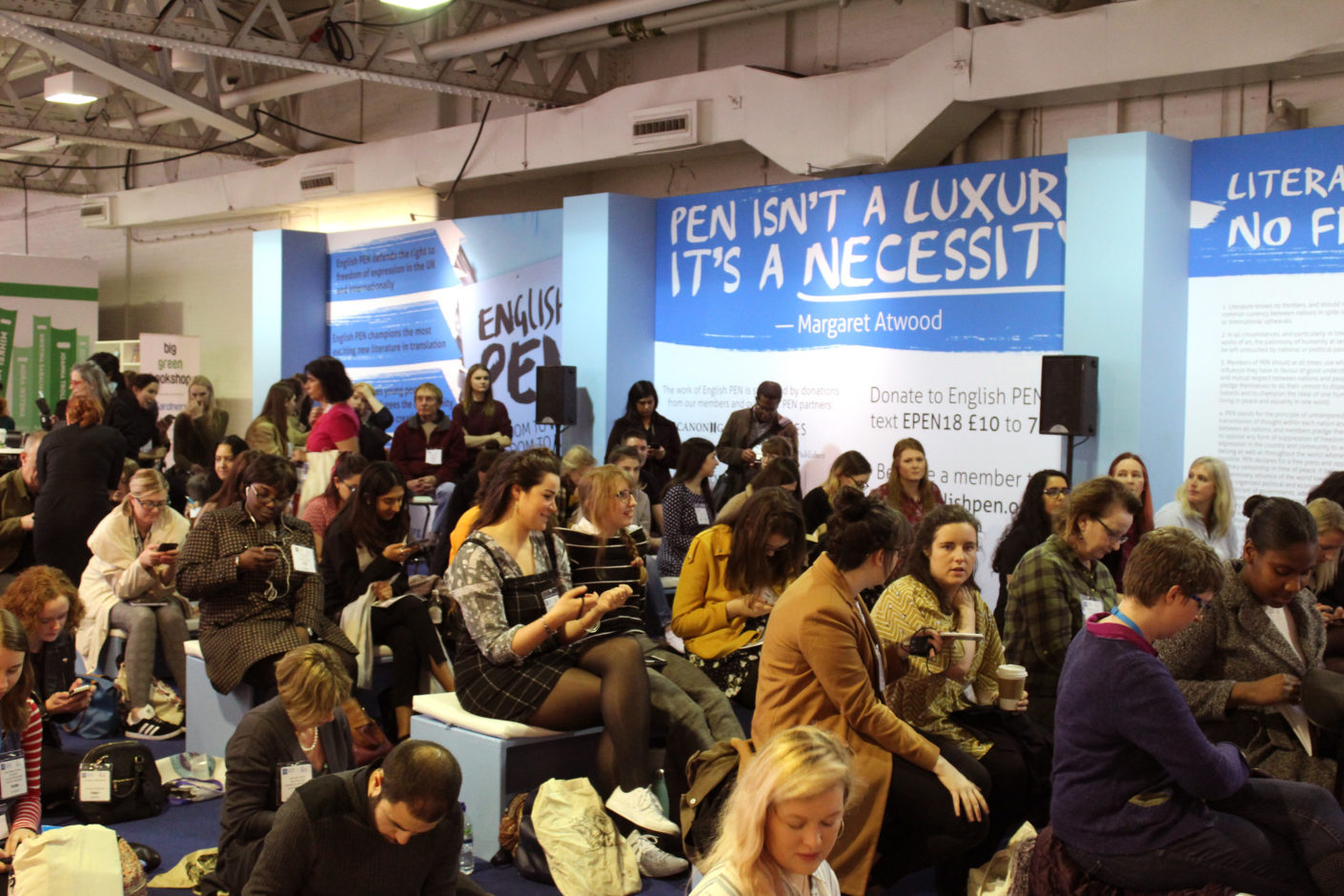 Join us for an exciting programme of events over three days (5–7 April 2022) featuring:

– A focus on the East and Southeast Asian diaspora with East Side Voices, a panel discussion featuring Helena Lee, June Bellebono and Ka Bradley.

– The first event for All Walls Collapse: Stories of Separation (to be published June 2022) – a collection by English PEN and Comma Press of new short fiction from twelve regions, translated from twelve languages.

– Dialogues on War: live conversations on Ukraine with author and President of PEN Ukraine Andrei Kurkov in conversation with broadcast journalist Georgina Godwin.

The English PEN Literary Salon is open to all visitors of The London Book Fair and is located on level one of Olympia in the Grand Hall.

We are also hosting two events in the Literary Translation Centre (level one in the Grand Hall) with the Translators Association, exploring pitching and access for literary translators on Wednesday 6 April.

2020’s Costa Book of the Year Award-winner Monique Roffey discusses possession, desire, and intersections between the mythic and the postcolonial with English PEN’s Hannah Trevarthen.

Dr Abdulaziz Al Musallam is an Emirati novelist, writer, researcher and consultant in cultural heritage and has written extensively on Emirati culture, fairy tales, folk memory and Nabati poetry. He is chairman of the Sharjah Institute for Heritage and is known for his research and scientific interests in the Gulf and Arab cultural heritage. Dr Abdulaziz Al Musallam will be talking about his career as a writer and the unique storytelling traditions of the UAE.

Author of the Day: Maggie O’Farrell

Helena Lee, founder of the East Side Voices cultural salon and Acting Deputy Editor of Harper’s Bazaar, and East Side Voices contributor June Bellebono and Dr Anna Sulan Masing explore with Ka Bradley the dazzling spectrum of experience from the East and Southeast Asian diaspora living in Britain today.

H.E. Mohammad Al-Murr is a renowned Emirati short story writer having published over fifteen collections. His stories, which he has described as a ‘mixed bag of realism, romance and sarcasm’, aim to reflect modern Emirati society. He will be discussing on the changing literary landscape of the UAE and the relationship between modern Emirati writing and its rich literary heritage.

You Have Not Yet Been Defeated: Jacques Testard and Nariman Youssef in conversation with Daniel Gorman

Alaa Abd el-Fattah is an Egyptian writer, technologist, and political activist. He has been prosecuted or arrested by every Egyptian regime to rule in his lifetime and has been held in prison for all but a few months since the coup d’état of 2013. In 2021 Fitzcarraldo Editions published You Have Not Yet Been Defeated – a selection of his speeches, interviews, social media posts and essays since the outbreak of revolution in January 2011 – many written from inside prison. The book has been translated by an anonymous collective.

Dialogues on War: Live conversation on Ukraine with Andrei Kurkov and Georgina Godwin

Dr Afra Atiq is an Emirati poet, spoken word artist, and PhD candidate. With a passion for languages, she writes and performs in a blend of bilingual and trilingual poems in English, Arabic, and French. Afra’s work has been featured on numerous international platforms alongside local showcases such as PublisHer summit, and Louvre Abu Dhabi. Community and education are a vital part of Afra’s work, inspiring her doctoral research into Instagram and the Arab literary ecosystem. She is a founding member of a thriving community of Emirati female writers called Untitled Chapters. She will be appearing in conversation with poet, playwright and author Joelle Taylor

All Walls Collapse: Constantia Soteriou and Lina Protopapa in conversation with Will Forrester

Cypriot writer Constantia Soteriou and translator Lina Protopapa, contributors to All Walls Collapse: Stories of Separation – a collection by English PEN and Comma Press of new short fiction from twelve regions, translated from twelve languages – discuss the physical and perceived walls that divide nations and communities, and how writers and translators move across them.

Khalid Albudoor is considered one of the most important names in the modern poetry movement of the UAE. Albudoor has been publishing poetry for more than 40 years and has been active in the writing community, helping to establish the Emirati Writers’ Union and participating in poetry festivals in the UAE and abroad. He is also an expert on the UAE’s oral heritage, Nabati poetry, traditional music, and storytelling.

Dubai Abulhoul is and Emirati writer and journalist. She recently published a series of six children’s books which introduce key figures of Emirati folklore to younger generations, and aim to preserve Emirati folktales, which have previously only been passed down verbally from one generation to another. Dubai will appear in conversation with Tamara Macfarlane to discuss what these traditional stories have to offer readers today.

Sharjah Market Focus events presented in partnership with the British Council and The London Book Fair.