Report and audio: In A Parallel Universe launch event 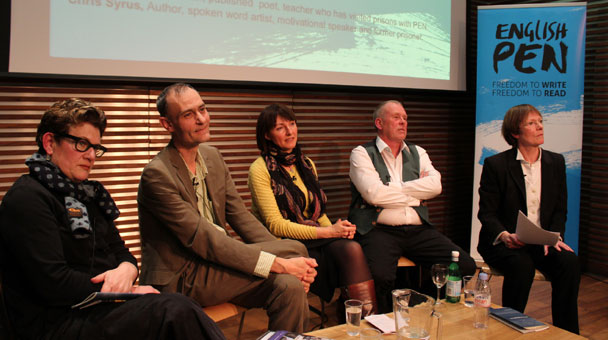 As the Books for Prisoners campaign draws to a close following a December high court ruling that deemed the Ministry of Justice’s 2013 ban on sending books to prisons illegal, the launch of the Prison Writing Collection 2015 comes at a welcome moment, turning from prisoners’ reading to writing. In a Parallel Universe and other voices gives us a rare insight into the creative minds of prisoners in our prisons across the United Kingdom today.

The evening opened with readings from the pamphlet itself, starting with a winning poem by Gareth Kerr that gives the collection its title:

In a parallel universe:
I found chimps that typed out the complete works of Shakespeare, it was infinitely strange.
Gave Schrodinger’s cat a saucer of milk, it drank the lot and ignored it.
Flew from a black hole, eyes shielded from the glare.
Met myself and argued.

The panel discussion which followed reflected on the importance of education, books and writing and the ways in which these can be used in the universe of the prison cell to help prisoners engage creatively with their histories, allowing them to make sense of their environments and give a voice to the people of these hidden spaces.

Talk turned to the importance of prisoners’ owning personal books to have on hand for different moods, emotional emergencies or times of the day – prison libraries alone are not sufficient to fulfil these needs. Some argue that prisons simply do not have space to accommodate prisoners’ personal collections of books and e-books have also been rejected on the basis of security risks. Yet these risks are slim, and can pose as obscure an array of risks as any other inanimate object when applied creatively. The chances of Dostoevsky’s Crime and Punishment or Musil’s A Man without Qualities being used to harm another cell mate or help somebody to escape are both slim and absurd.

Chair Harriett Gilbert (BBC broadcaster, presenter of the World Book Club, NNC World Service and A Good Read, R4) soon turned to the question of books for education, pointing out that the current level of education at GCSE is too low and many prisoners are unable to access higher education, leaving them unequipped for employment after their sentence has been completed. Rod Clark underlined that informal learning has been proven to reduce reoffending, and is integral to the ability of prisoners to reinvent themselves as individuals. Indeed 82% of prisoners have a reading age of 7, a statistic that is largely unacknowledged by politicians when building policy. It is young men, aged 18-25 and serving long sentences, who could most benefit from the introduction of higher education.

Prisons are required to sustain prisoners and fill their time productively and positively. There are several factors which have meant higher education is often not possible. Both students and teachers are frustrated by frequent movement between prisons, which acts as a disincentive for running classes since learning is fragmented and irregular. Cuts to funding as a result of student loans have also meant that prisoners are restricted to taking degrees in the final six years of their sentence. Yet it is clearly to our societal benefit that prisoners on shorter sentences be able to take further education degrees in order to equip themselves intellectually for working life following release.

Many of the panel members celebrated the less tangible benefits of education beyond A-level certificates: prisoners benefit most from the expansive effects of literature and education, which give them the opportunity to reflect on their own histories or traumatic experiences. In prison, the diversity and richness of life shrinks to the parameters of the cell. Reading and writing expands the mind and opens it to new possibilities. In prison, this is needed more than anywhere. Interestingly, prisoners often begin with books such as ‘True Crime’ fiction which they are most comfortable to relate to and be seen with, before exploring other genres.

John Podmore, former prison governor, strongly advocates the use of e-learning as the solution to the issue of movement between prisons which would allow for sustained, long-distance learning. The introduction of e-readers could also be the solution to concerns over space and storage. Indeed programmes such as ‘Story-book Dads’ allow fathers to record themselves reading books for their children at home. Although it seems we are not there yet, this is what the future could look like for prisons around the United Kingdom.

One audience member posed the question: what can be done next? With the recent victory overriding the court ruling denying books for prisoners, friends and family can now post books to prisons through specially designated delivery companies. It seems we need to change public opinion, force politicians to prioritise positive legislations for improving education in prisons and crucially give journalists access to prisons to record and expose the issues they face daily. Testimonial relationships uniting academics, writers and prisoners to write literature together in solidarity and more creative writing groups in prisons would certainly be a move in the right direction. Not all prisoners are inside for equal crimes, and there are an estimated 12,000 wrongfully imprisoned persons in the UK. The line between ‘them’ and ‘us’ is finer than we might like to think.

Never has that age-old adage ‘reading sets you free’ been more fitting than to describe the liberating and expansive effects of literature on the voices and lives of prisoners. At times, we all find ourselves in what can feel like a parallel universe: often books take us there, but they can also bring us home. Prison needs to be a place of rehabilitation, education, reinvention and creativity. We need to hear these voices from behind the walls, and this evening we made steps towards achieving this.

Read In A Parallel Universe on Scribd