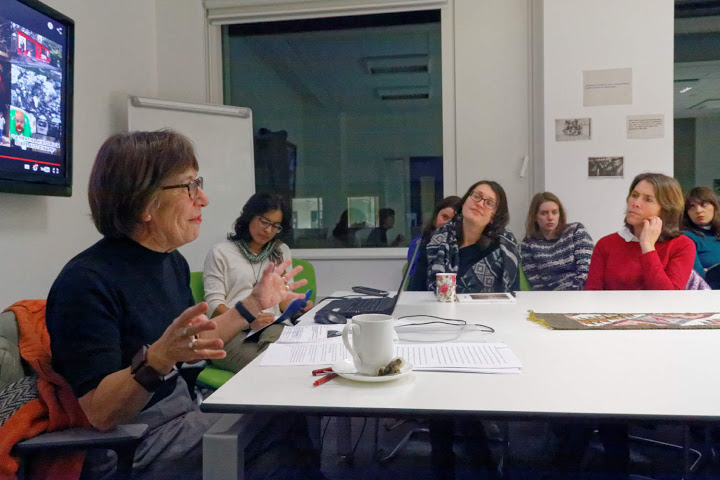 We’ve just come to the end of a busy term of PEN events, which started way back in October with an event for the Cambridge Festival of Ideas. We shared readings and crafts, and created a banner exploring post-conflict poetry.

Then in November Zoe Lambert, writer and academic, and Michelle Green, writer and spoken word artist, visited Cambridge to talk about their work with refugees. We heard moving extracts from Lambert’s short story ‘33 Bullets’, about the detention of asylum seekers, and Green’s collection of short stories Jebel Marra, about the civil war in Darfur.

On the 15th of November, in the shocked aftermath of the Paris attacks, we commemorated the Day of the Imprisoned Writer with poetry readings. Nineb Lamassu attested to the power of literature in very difficult times with a personal and moving poem about migration and refugees. Nineb Lamassu is a writer, researcher and translator and is crucial to our work here at Cambridge Student PEN.

Our next events this term were organised in collaboration with other societies. Along with the Baha’I society, and as part of our continuing work for Mahvash Sabet, an Iranian Baha’i poet sentenced to 20 years in the notorious Evin prison for her faith, we screened To Light a Candle: Maziar Bahari’s documentary recording the persecution and resilience of the Baha’i community in Iran.

Our final event of term was organized with Cambridge-Mexico Solidarity and the Latin American Society. We were joined by Amanda Hopkinson, a former trustee of English PEN who co-founded the Writers in Translation Committee, and Juana Adcock, a poet and translator working in English and Spanish. We shared talks, poetry readings and discussions centred around the case of the Ayotzinapa 43, and human rights in Mexico.

On the 26th September 2014, 43 male students from the Ayotzinapa Rural Teachers’ College went missing in Iguala, Mexico. The official investigation concluded that these students were handed to the local Guerreros Unidos (‘United Warriors’) crime syndicate. Mass graves were uncovered near Ayotzinapa, and two of the 43 missing students were forensically identified as dead. But the details of the case remain unclear and this September a sixth-month international investigation described the Mexican government’s account of what happened to the other 41 students as ‘scientifically impossible.’

This horrific case is not an isolated event, and Juana Adcock spoke strikingly and poetically on this: ‘in Guerreo,’ she said, ‘now, we are all walking on bones’. Adcock read her own work and also her translation of David Huerta’s Say Ayotzinapa.

We heard how young people who have been ‘disappeared’ are often referred to as having ‘gone astray’, placing blame on victims rather than perpetrators of disappearances.

We were also given a serious reminder of the significance of the role of campaigners at the event. An audience member spoke up about how she fears that her protests here in the UK may endanger her family at home in Mexico. A speaker from Cambridge-Mexico Solidarity told us how photographs taken in front Cambridge’s iconic King’s College Chapel were taken note of in Mexico, even when large protests in Mexico had been given less coverage. There was also discussion about how the mood has changed in Mexico, with more people speaking out against injustice.

Working in collaboration with other societies ­– and with visits from Zoe Lambert, Michelle Green, Amanda Hopkinson and Juana Adcock – has shown us just how important displays of solidarity can be. Here at Cambridge Student PEN we hope that 2016 sees more people speaking out in solidarity and against injustice than ever before.

With lots of love and hopes for a happy new year,

Cambridge Student PEN are the University of Cambridge’s student English PEN hub. Find out more and get involved via their Facebook page.

Keep up to date with Student PEN campaigns around the disappeared 43 students from Ayotzinapa on our Tumblr.