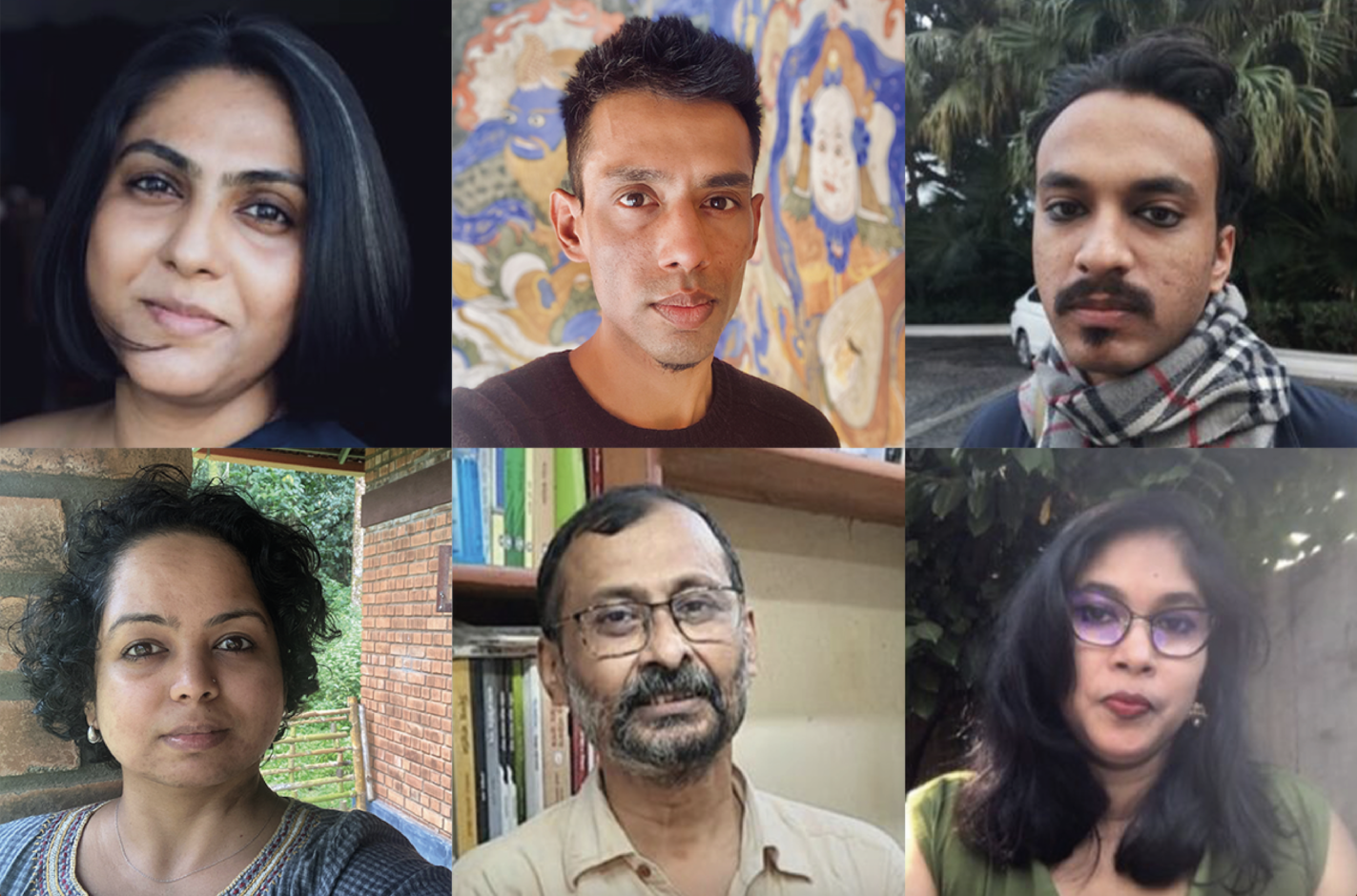 – Six translators representing four of the languages of India have been selected for PEN Presents, the new award for sample translations.

– The first issue of PEN Presents is a partnership between English PEN and the British Council, as part of India/UK Together, a Season of Culture.

– The samples, selected by an international panel of writers, agents, editors and critics, will be showcased to publishers of literature in translation.

Deepa Bhasthi, for a translation from Kannada of Banu Mushtaq’s Haseena and Other Stories.

Gopika Jadeja, for a translation from Gujarati of Umesh Solanki’s Transformations.

Kartikeya Jain, for a translation from Hindi of Chandan Pandey’s Songs of Glory.

Shabnam Nadiya, for a translation from Bengali of Wasi Ahmed’s The Ice Machine.

Nikhil Pandhi, for a translation from Hindi of Anita Bharti’s Chronicle of the Quota Woman and Other Stories.

V. Ramaswamy, for a translation from Bengali of Adhir Biswas’ Last Boy: An Untouchable Boy’s Classroom.

The six winners were chosen from a shortlist of 12 translators, who were awarded grants to create samples of their proposed works. The samples have received editorial support from English PEN, and are available to read on the PEN Presents platform, which will be developed as an online catalogue of the most outstanding, original, and bibliodiverse literature not yet published in English translation.

Selected from a phenomenal shortlist, these samples comprise the first few thousand words of what I’m sure will soon be books in the hands of English-language readers. This inaugural selection features six exceptionally talented translators conveying six significant works of literature across linguistic borders; taken together, these projects represent an extraordinary range of languages, contexts and perspectives. We are excited to see which publishers – in the UK, India, and across the Anglophone market – take them on.

In their range of forms, themes, voices and context, these samples testify to the variety and quality of literature across India and the diaspora, and to the talent of the writers and translators creating it. We are thrilled to be presenting these artists and their words, and excited to see them make their way to English-language publishers and readers.

The first round of PEN Presents is a partnership between English PEN and the British Council, as part of the British Council’s India/UK Together Season of Culture which will see a vast programme of creative collaboration, education and cultural exchange including key projects focusing on building stronger connections between India and the UK’s literary and publishing sectors. Featured PEN Presents winners will be platformed at literary festivals, events and journals throughout 2023.

Through our work in literature and publishing, we are creating more platforms and opportunities for outstanding Indian writers and literary professionals to take the best of Indian-language literature to global audiences in new translations into English. The India/UK Together Season of Culture has literature, publishing, and translation as key elements of the collaborations between India and UK with emerging and established creative professionals. We are delighted at the line-up of the inaugural PEN Presents winners and are excited at the prospect of some great Indian voices writing in Kannada, Hindi, Bengali and Gujarati being read by English-language audiences for the first time.

The next round of PEN Presents – for translations of works from any region, originally published in any language – will open for proposals on 1 January 2023, in collaboration with Translating Women and supported by an Open Innovation Platform grant from the University of Exeter.

Deepa Bhasthi is a writer and translator living and working in Kodagu, South India. Her translation of Jnanpitha Awardee Dr Kota Shivarama Karanth’s novel The Same Village, The Same Tree was published in August 2022. A translation of short stories by Kodagina Gouramma, among the earliest women writers in Kannada in the early twentieth century, is forthcoming from Yoda Press. Deepa writes on visual art, literature and politics of culture for publications including ArtReview, MOMUS, Literary Hub, Himal Southasian and Hyperallergic. Her research interests are in the areas of sociolinguistics, land versus landscape and food politics. She occasionally works in visual art projects.

Gopika Jadeja is a bilingual poet and translator, writing in English and Gujarati. Her literary writing and translations have been published widely. Gopika is committed to translating writing from marginalised communities and is working on a project of English translations of Dalit and Adivasi poetry from western India. She is Editor at Large for Wasafiri: International Contemporary Writing and Editor for PR&TA: Practice Research and Tangential Activities. She currently lives and works in Singapore.

Kartikeya Jain is a 2022 South Asia Speaks fellow and an independent writer, editor and translator (English and Hindi) from Delhi, India. Their work appears in Out of Print, Scroll.in, The Deccan Herald, The Kodai Chronicle, Thelallantop.com and Nether Quarterly. They live and work in Kodaikanal.

Shabnam Nadiya is a Bangladeshi writer and translator, settled in California. A graduate of the Iowa Writers’ Workshop, she is the recipient of the Steinbeck Fellowship (2019) for her novel-in-progress Unwanted; the PEN/Heim Translation Grant (2020) for her translation of Mashiul Alam’s short fiction The Meat Market and Other Stories; and the 2019 Himal South Asian Short Story Prize for her translation of Mashiul Alam’s short story ‘Milk’. Nadiya’s translations include Shaheen Akhtar’s novel Beloved Rongomala (Eka/Westland, forthcoming in September 2022), Leesa Gazi’s debut novel Hellfire (Eka/Westland, September, 2020), and Moinul Ahsan Saber’s novel The Mercenary (Seagull Books, 2018). Her original work as well as her translations have been published in: SAAG Anthology, Harpur Palate, The Offing, Joyland, Amazon’s Day One, Gulf Coast, Copper Nickel, Wasafiri, Words Without Borders, Asymptote, Al Jazeera Online, Flash Fiction International (WW Norton).

Nikhil Pandhi is an Ambedkarite queer-feminist researcher and anti-caste translator from India. He is currently completing a PhD in cultural anthropology at Princeton University. He is broadly interested in the radical world-making possibilities and pluriversal capacities of anti-colonial and anti-Brahmanical modes of storytelling. His anthropological and translational research cross-pollinates Dalit studies, Black studies, Queer-feminist studies and their intersections with critical studies of caste, race and ethnicity across South Asia and the Global South. He is currently editing and translating Love in the Time of Caste, a collection of selected contemporary Dalit-feminist love stories, forthcoming from Zubaan. Some of his translations of Dalit-feminist poems can be found on Scroll.in and The Wire. He is also working on a book of poems inspired from his everyday auto-ethnographic thresholds.

V. Ramaswamy took up literary translation from Bangla, of voices from the margins, after two decades of grassroots and public activism in support of the labouring poor in his city, Calcutta. He has translated Subimal Misra’s The Golden Gandhi Statue from America: Early Stories, Wild Animals Prohibited: Stories, Anti-Stories, and This Could Have Become Ramayan Chamar’s Tale: Two Anti-Novels, and Manoranjan Byapari’s novel The Runaway Boy. His translation of Adhir Biswas’s Memories of Arrival: A Voice from the Margins, was published in 2022, as were Shahidul Zahir’s Life and Political Reality: Two Novellas(co-translated with Shahroza Nahrin), and Why There Are No Noyontara Flowers in Agargaon Colony: Stories. He has attended residencies at Sangam House, India, Writers Omi, USA, and at the Toji Cultural Foundation, Korea. He was selected for the inaugural Literature Across Frontiers – Charles Wallace India Trust fellowship in creative writing & translation at Aberystwyth University, Wales, in 2016. Ramaswamy was recently selected for the inaugural translation fellowship of the New India Foundation.