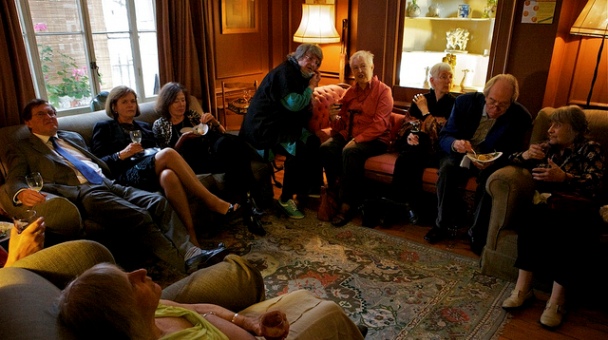 Eva Tucker’s career as a novelist was unusual in that it fell into two phases separated by 40 years. A figure on the literary scene of the 1960s, she was published by the independent John Calder, now perhaps most remembered for his championing of Samuel Beckett. Tucker’s novels Contact (1966) and Drowning (1969) stopped short of the more extreme experimentalism of the era, but were admired by the circle of young writers of an intellectual bohemia which often enjoyed its movable feasts at the flat in Belsize Park, north-west London, belonging to Eva, who has died aged 86, and her husband John Tucker, a philosopher.

This early promise did not lead to further novels in following years, and many wondered why. Contemporaries such as Beryl Bainbridge, who had looked up to Eva, found their literary reputations surpassing hers. Had she become difficult, or lost inspiration? Had the vagaries of marriage or the challenge of bringing up three daughters become the enemies of promise? Eva did not stop writing, but occasional journalism and broadcasting became her public face until the start of a new century.

Suddenly the novelist reappeared, once again via a small publisher, Starhaven. The two books of this phase, Berlin Mosaic (2005) and Becoming English (2009), were in effect memoirs of Eva’s early life and that of her maternal family – vivid evocations of a German Jewish world lost in the catastrophe that swept young Eva away from her homeland at the age of nine.

She was born in Berlin. Her father, Otto Steineke, was a journalist with communist affiliations, though members of his family in provincial Thuringia held opposite views. Her mother, Margot, was the daughter of the distinguished physician Felix Opfer; and it was in the house of her grandparents that Eva spent her most memorable days of childhood. The burning of the Oranienburg synagogue in 1938 preluded the end of the idyll. In early 1939 Opfer was stripped of his right to practise medicine. Eva and Margot were evacuated to Britain, sponsored by Quakers.

Margot worked as a maid and later in a munitions factory and Eva was sent to a school in Weston-super-Mare, Somerset, and rapidly took to all things English. Margot was less resilient and her daughter’s embarrassment at her mother’s accent and aspect is acutely depicted, if deftly unanalysed, in Becoming English. This novel – or novella, as it is typically succinct – tracks Eva’s teenaged progress into London’s world of small presses, literary magazines and gatherings. She married John in 1950 and the couple spent their first years together in a milieu that seemed right out of a Muriel Spark novel.

John went on to lecture for periods in Wales, Canada and Nigeria; Eva joined him for a spell in the last of these. At intervals, and after he died in 1987, she was active in numerous writing programmes and groups. She served for years on the writers in prison committee of English PEN, vocal especially on behalf of the Nigerian writer and activist Ken Saro-Wiwa. She also presided for more than a decade over the North London Interfaith Group. Her ecumenical instinct was strong, her ‘convincement’ to Quakerism steady, her Jewishness more ethnic than religious. In later years she worried over the rise of prejudice against Muslims, yet she remained a defender of free speech and supportive of PEN’s No Offence campaign against censorship.

No stranger to argument, Eva was trenchant in support of a liberalism in which her years in Britain persuaded her to believe. Her relationship with her German roots was balanced, yet understandably less affectionate. She travelled to the country of her birth after the Berlin Wall came down and was pleased to be invited in 2006 to give a speech about her grandfather to a conference on murdered Jewish doctors. The death of her beloved grandmother in Auschwitz left an indelible scar. Less vivid yet hurtful was that she was never reunited with her father: he died in a bombing raid in 1945.

Distinguished writers and friends continued to appear at get-togethers in Eva’s Belsize Park flat until she was well into her 80s. She took a lively interest in the progress of her daughters, whose careers reflect aspects of the creative flair she sustained until the end. Judith is a painter and lecturer, Catherine an Anglican vicar and Sarah a group analyst. All survive her.

Yet another heartache this year. We’ve lost our dear Eva Tucker, one of English PEN’s most stalwart members.

I mourn her as a friend and will always remember how inspirational she was not only as an indefatigable member of the WiPC, but also as a humanist who toiled passionately to bring together people from different faiths and origins. She was, in the best sense of the phrase, a ‘world citizen’ and possessed the unassailable belief that, irrespective of who we are or what we believe in or where we come from, our souls have the adamantine commonness that disdains our differences and often – despite the distortions imposed on us by autocrats, religious fanatics and the generally misguided – overcomes them.

It is, I think, this belief that formed her also as the very accomplished writer that she is. Born into the Third Reich and under threat for having some Jewish blood, she escaped the Holocaust by reaching the UK as a very young refugee. Her latest books, Berlin Mosaic and Becoming English, both published by Chip Martin’s excellent publishing house, Starhaven, and recently reissued as Belonging: two novels, poignantly reflect her love of the rich culture she had to leave behind and the anguish that tormented her after its loss. (The same qualities can be found in her earlier books, Contact and Drowning, if my memory serves me right both published by John Calder in the 1960s.) She is indeed one of those profound writers who offer truths and deep emotions with that rare simplicity that literature demands.

May she inspire the generations to come as she has inspired us.

Please send your memories of and tributes to cat@englishpen.org and we will share them on this page.

On Friday 4 December you are also welcome to call in to 63b Belsize Park Gardens, NW3 4JN between 10.00 and 12.00 am to choose a book from her extensive library as a memento. If you would like to do this please email Catherine cjt01@live.co.uk

Her family are holding a memorial meeting for Eva at Hampstead Quaker Meeting House, 120 Heath Street Hampstead, London NW3 1DR at 3.00 pm on Saturday 23 January 2016 to be followed by drinks to celebrate her long life at Burgh House, New End Square London, NW3 1LT from 4.30 – 6.30 pm. All welcome but please email if you plan to attend: sarah1.tucker@virgin.net

If you have a photograph of Eva that you would like to have included in a slideshow of her life, then please email a digital image to Judith j.a.tucker@leeds.ac.uk

It was the Quakers that enabled Eva to leave Germany in 1938 and they continue to do extremely valuable work with refugees. In recognition of this, and in acknowledgement of the importance of Hampstead Meeting to Eva for so many years, her family is making a collection in her name. If you feel moved to make a contribution in her memory, then please make cheques to ‘Hampstead Quaker Meeting’ and send in an envelope marked:

In memory of Eva Tucker