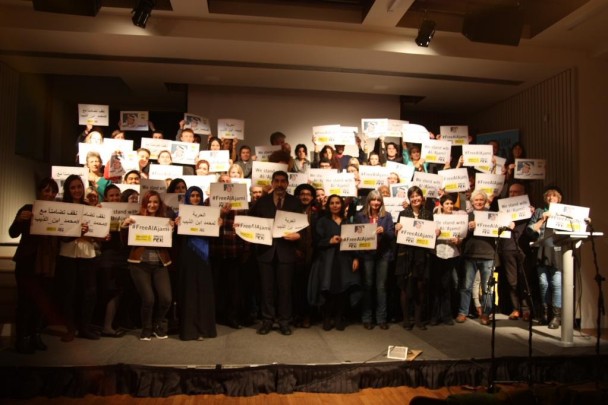 To mark the opening of the 30th session of the Human Rights Council this week, English PEN has joined 15 other organisations from around the world in calling on the UN to speak out in support of imprisoned poet Mohammed Al-Ajami.

Join the call to free Al-Ajami: sign our petition

We are writing to urge you to pay continuing attention to the arbitrary arrest, detention, and conviction of the Qatari poet Mohammed al-Ajami, widely known as Ibn al-Dheeb.

Various UN mechanisms have addressed al-Ajami’s case, as well as the human rights situation in Qatar more generally. Shortly before al-Ajami’s conviction in November 2012, the UN Committee against Torture criticized violations of due process by the State of Qatar in its consideration of the country’s second periodic report. The Committee recommended that Qatar “promptly take effective measures to ensure that all detainees, including non-citizens, are afforded, in practice, all fundamental legal safeguards from the very outset of detention.” It also expressed concern that persons detained under provisions of the Protection of Society Law (Law No. 17 of 2002), the Law on Combating Terrorism (Law No. 3 of 2004), and the Law on the State Security Agency (Law No. 5 of 2003) “may be held for a lengthy period of time without charge and fundamental safeguards, including access to a lawyer, an independent doctor and the right to notify a family member and to challenge the legality of their detention before a judge.” The Committee specifically cited Mohammed al-Ajami as an example of the fact that persons detained under these laws are often subject to incommunicado detention or solitary confinement. Though the Committee urged Qatar to amend its laws and ensure that fundamental safeguards are provided, Qatar has not taken any steps to address these concerns.

As noted above, al-Ajami’s case received additional attention from special procedures of the Human Rights Council through a joint communication issued on 21 December 2012, shortly after his original sentencing. The Special Rapporteurs in the Field of Cultural Rights, on the Independence of Judges and Lawyers, and on the Promotion and Protection of the Right to Freedom of Opinion and Expression expressed concern in a joint communication to the Qatari government that the arrest, detention, and sentencing of al-Ajami may have been “solely related to the peaceful exercise of his right to freedom of opinion and expression.” The Special Rapporteurs further noted concerns regarding the fairness of his trial and his treatment while in detention.

On 14 February 2013, the Qatari government responded to the UN human rights experts by asserting that the government followed the proper procedures throughout al-Ajami’s case, and that the State “[keeps] in mind [its] obligations under international conventions and standards related to human rights and their implementation.” We believe that the Qatari government’s response did not accurately represent the administration of justice in this case, and the authorities took no further action of which we are aware.

On 8 January 2013, the Office of the UN High Commissioner for Human Rights (OHCHR) again voiced concern over the situation of Mohammed al-Ajami. The OHCHR’s spokesperson told reporters: “We are concerned by the fairness of his trial, including the right to counsel.” She additionally pointed to allegations that al-Ajami’s initial statement may have been tampered with in order to wrongly incriminate him.

In 2014, during a review of its human rights record in the context of the Universal Periodic Review, the Government of Qatar expressly rejected a recommendation to release Mohammed al-Ajami. At the same session, the government pointedly accepted a recommendation to “continue and strengthen relations with OHCHR.” We urge you to remind the Qatari government of this commitment.
To the best of our knowledge, the United Nations has not taken any action on Mohammed al-Ajami’s case since his final appeal in October 2013. Thus, we respectfully ask that you continue to dedicate attention to his case and follow up on his arbitrary imprisonment, and insist that Qatar take corrective action to address the human rights violations that have been committed against him. We also ask that you raise these concerns with the Government of Qatar and follow up on the unaddressed recommendations set forth in past communications.

While we understand that his treatment while in prison has been generally acceptable, it remains the case, in our view, that he has been unfairly tried and convicted and, for that reason, this is a matter of an ongoing injustice.

Thank you for your time and consideration. Please do not hesitate to contact us if you need more information or clarifications.

State security officials summoned Mohammed al-Ajami to a meeting on 16 November 2011. Upon arrival, authorities arrested him on suspicion of insulting the Emir of Qatar, Sheikh Hamad bin Khalifa al-Thani, and “inciting to overthrow the ruling system.”

The charges against al-Ajami related to a 2010 poem (“The Cairo Poem”) he had recited and which the Qatari authorities allege to have criticized the Emir. The poem nevertheless referred to the Emir as “a good man” and expressed “thanks” to him, and it formed part of a ‘call-and-response’ type of exchange that is a popular form of recitation. Al-Ajami recited it during a private gathering in Cairo in August 2010, after which one of the attendees posted a video of the event online.

On 29 November 2012, a lower court sentenced al-Ajami to life imprisonment following an unfair trial. The court reportedly heard testimony from three “poetry experts” employed by the government’s culture and education ministries, who testified that the poem represents an insult to the Emir of Qatar and his son.

On 25 February 2013, an appeals court reduced al-Ajami’s life sentence to 15 years. The Court of Cassation, Qatar’s highest court, upheld the 15-year sentence on 20 October 2013. Al-Ajami’s only remaining path to freedom is a pardon from the Emir.

The administration of justice in this case has been grossly flawed and has resulted in the arbitrary detention of Mohammed al-Ajami.

We believe that the legal basis of the charges against Mohammed al-Ajami – based in Articles 134 and 136 of the Qatari Penal Code – do not constitute internationally recognizable criminal offenses, unlawfully restrict the right to freedom of expression, and expressly contradict Article 19 of the Universal Declaration of Human Rights (UDHR), which states that: “Everyone has the right to freedom of opinion and expression; this right includes freedom to hold opinions without interference and to seek, receive, and impart information and ideas through any media and regardless of frontiers.”

The authorities held him for a prolonged period of pre-trial solitary confinement. Following his arrest on 16 November 2011, Mohammed al-Ajami was held incommunicado for three months before he was allowed visits from his family. The first trial session was held in March 2012. Throughout the pre-trial investigations and despite petitions to the judge about his treatment, he was held in solitary confinement in a very small cell.

While he was being held in solitary confinement, authorities forced al-Ajami during interrogations to sign a document falsely stating that the poem was read in a public place in the presence of the press, according to information available to our organizations. In November 2011 and, reportedly, in subsequent court sessions, the lawyer of Mohammed al-Ajami asserted to the court that the poem was recited only in private.

The trial was held behind closed doors without legal basis, and the court disregarded Mohammed al-Ajami’s right to choose his own legal representation by its imposition of another lawyer in place of the one he had chosen.

There was a lack of separation of investigative and decision-making powers, infringing on the principle of impartiality. According to information available to the signatories, Mohammed al-Ajami’s lawyer requested at the first session of the Doha Criminal Court that the presiding judge exclude himself from the case as he had conducted the pre-trial investigation. The judge rejected the lawyer’s request.
Al-Ajami was denied the right to be present at the trial. During the final hearing in October 2012, the court expelled Mohammed al-Ajami for being unruly. In his absence, and without measures taken to preserve the rights of the defense, the court proceeded to schedule the judgment to be held on 29 November 2012. Mohammed al-Ajami was not informed of the date. On the day of the verdict, the prison authorities did not bring Mohammed al-Ajami to court. Nevertheless, according to sources who informed al-Ajami’s former lawyer, the judge pronounced to the court “on the attendance of Mohammed al-Ajami, we have sentenced him to life.”

State security officials in Qatar continue to detain people in the absence of due process under laws that increasingly contribute to an environment that stifles and criminalizes expression. Mohammed al-Ajami is just one of the victims of this political reality. The international community should not ignore this violation of the right to freedom of expression or the failure to ensure fair trials in Qatar.