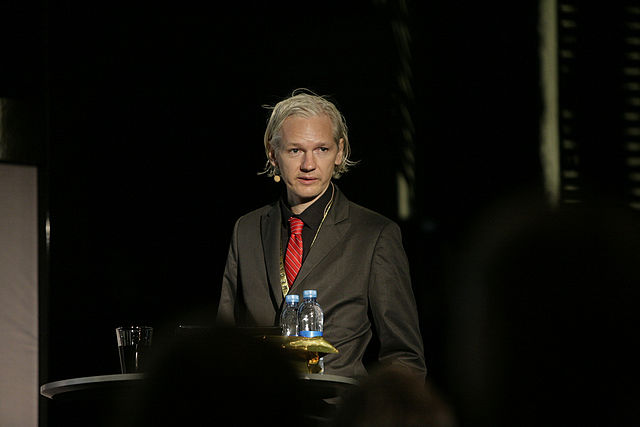 English PEN has joined rights groups across the world in calling for the release of WikiLeaks publisher Julian Assange on the occasion of his 49th birthday on 3 July 2020.

Dozens of press freedom, human rights, and privacy rights organisations across five continents – including our sister centres German PEN, PEN Melbourne, PEN Norway, PEN Perth, and Sydney PEN – have co-signed an open letter to the UK government, calling for the immediate release of Julian Assange. The publisher, who continues to be held in HMP Belmarsh, is facing extradition to the United States, where he has been indicted on 18 counts for obtaining, possessing, conspiring to publish and for publishing classified information.

In the open letter, initiated by the Courage Foundation and sent to Secretary of State for Justice and Lord Chancellor Rt Hon Robert Buckland QC MP on 3 July 2020,  the co-signers write:

The charges against Mr Assange carry a potential maximum sentence of 175 years in prison. Sending Mr Assange to the US, where a conviction is a near certainty, is tantamount to a death sentence.

This is an unprecedented escalation of an already disturbing assault on journalism in the US, where President Donald Trump has referred to the news media as the ‘enemy of the people’. Whereas previous presidents have prosecuted whistleblowers and other journalistic sources under the Espionage Act for leaking classified information, the Trump Administration has taken the further step of going after the publisher.

On 24 June 2020, the US Department of Justice issued a second superseding indictment against Mr Assange, adding no new charges but expanding on the charge for conspiracy to commit computer intrusion.

This indictment effectively opens the door to criminalising activities that are vital to many investigative journalists who write about national security matters. Beyond the case itself, we are concerned that the mere fact that Assange now risks extradition and potentially decades behind bars if convicted in the USA has a chilling effect on critical journalism, which is essential for exposing the truth about crimes committed by governments.

The open letter also highlights ongoing concerns for Julian Assange’s health and well-being, These concerns have mounted in recent months due to the outbreak of coronavirus, especially as Assange suffers from a chronic lung condition that makes him especially vulnerable to Covid-19.

We call on the UK government to release Mr Assange without further delay and block his extradition to the US – a measure that could save Mr Assange’s life and preserve the press freedom that the UK has committed to championing globally.

The extradition proceedings, which commenced for one week in February 2020 in London, are scheduled to continue for three weeks from 7 September 2020.