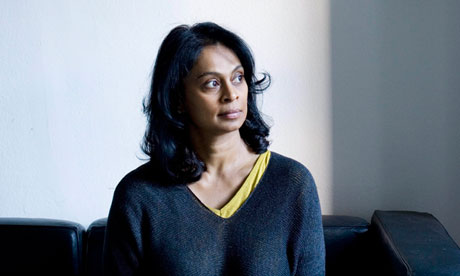 The PEN/Ackerley Prize has been awarded to Sonali Deraniyagala for her memoir Wave published by Virago. Wave is a piercingly frank memoir of grief that begins in Sri Lanka on December 26 2004, when the author lost her parents, her husband, and her two young sons in the tsunami she miraculously survived

Peter Parker, chair of the judges said: ‘To write any kind of book about the loss of both parents, a  husband and  two small sons in a natural disaster is a hazardous undertaking, but in Wave Sonali Deraniyagala has produced one that goes far beyond its dreadful starting point. Subtitled  ‘A Memoir of Life After the Tsunami’, it is as much a reclamation and celebration of the lives that were lost as it is an account of the processes of shock, grief and mourning. In a strong and varied shortlist, Wave emerged as the winner of this year’s Prize because it upholds the standards that J R Ackerley himself set: truthful, unsparing, and written with outstanding grace and economy.’

Sonali Deraniyagala said: ‘The pleasure of receiving this wonderful prize makes me see that there is a beauty in struggle and a resting place in the eyes of others … I have found myself a writer, another identity in the ongoing  bewildering journey of my life.’

The PEN/Ackerley Prize is the UK’s only literary prize dedicated to memoir and autobiography. It was established in memory of J R Ackerley, the author and literary editor. ­­­­This year’s prize judges were Peter Parker (Chair), Colin Spencer, Georgina Hammick and Richard Davenport-Hines.  The other authors on this year’s exceptionally strong and diverse shortlist were: Michael Blakemore, Julian Barnes, Harry Eyres and Penelope Lively.

The prize was awarded on Monday 14 July at the English PEN Summer Party at which Deraniyagala’s editor Lennie Goodings delivered an acceptance speech on her behalf.  Deraniyagala receives a cheque for £3,000.

Peter Parker, chair of PEN/Ackerley judges, takes an in-depth look at the 2014 shortlist

‘You put two things together that have not been put together before,’ Julian Barnes writes in Levels of Life. ‘And the world is changed.’ As with science, so with love. At the centre of Barnes’s book and Barnes’s life is his wife of thirty years, Pat Kavanagh, who died in 2008 – though the author’s approach to the heart of his matter seems at first wilfully oblique. The book is divided into three parts, or levels: ‘The Sin of Height’ is about three ballooning pioneers, one of whom is better known as the pioneering photographer Nadar; a love affair between the other two ballooning enthusiasts, Sarah Bernhardt and an English army officer called Frederick Burnaby, is the subject of the second semi-fictionalised part, ‘On the Level’; it is only in the third, ‘The Loss of Depth’, that Barnes describes and analyses what one loses when someone dies – but as he does so we realise that the two earlier sections have carefully laid a metaphorical groundwork for what we are now reading. The best description of love have always relied upon metaphor, and this very short but very powerful book accumulates in the reader’s mind as if through a series of echoes. To say that the book is ingenious runs the risk of making it sound cool or calculating, but this is far from the case. It is moving, often witty, occasionally angry, and of course, extremely well written.

Reading Michael Blakemore’s Stage Blood, one is reminded of the song in Applause, Lee Adams and Charles’s Strouse’s musical adaptation of All About Eve: ‘Welcome to the theatre, / To the the magic, to the fun, / Where painted trees and flowers grow / And laughter rings fortissimo, /And treachery’s sweetly done.’ Subtitled ‘Five tempestuous years in the early life of the National Theatre’, Blakemore’s book is a compelling and often astonishingly frank eyewitness account the creation and management of one of our great national institutions. Blakemore became an Associate Director of the National in 1971, and book was written partly as a riposte to Peter Hall’s Diaries, published in 1983. It is, however, much more than that. Blakemore not only provides indelible and often very funny portraits of Hall, Laurence Olivier, Kenneth Tynan and his other colleagues, but also writes brilliantly about what it is like to find, rehearse and stage plays. After reading it, you feel that you have actually seen many of the productions he writes about. When describing the various plots, feuds and alliances of his workplace, Blakemore spares no one – least of all himself. Having written the book at some remove from the events it describes, Blakemore is able to see – and owns up to – the instances when he also handled things less well than he might have done. By turns amusingly rueful and exhilaratingly waspish, this is a hugely enjoyable memoir of an extraordinary period in our cultural history.

In Wave Sonali Deraniyagala has set herself an extremely difficult and hazardous task: to write about unimaginable loss. The author was on a family holiday in a coastal resort in Sri Lanka when the 2004 tsunami struck. She survived, but her parents, her husband and her two small sons all died. This is the kind of terrible story we read about, genuinely aghast but safely distanced from it, in newspaper reports: we turn the page and continue our lives. But this book is, as its subtitle puts is, ‘A Memoir of Life After the Tsunami’, and what truly distinguishes it is the author’s determination to describe the process of absorbing such an overwhelming disaster; the often degrading workings of shock, grief and mourning; the necessary adaptation to a life that has been robbed of more or less everything that matters. This is, naturally, a deeply distressing book; the reason it is not a depressing one – quite apart from the sheer quality of the writing – is that it gives life back to those who died. What at first seems to be a book about death turns out to be a book about life. Deraniyagala provides such clear portraits of her family, her two sons in particular, that we feel as if we had known them, and this has saved them from erasure. These portraits emerge in brief vignettes, not always chronological, evoking the way memories flash upon people who are grieving, the kind of memories – often trivial – that fix a life. Deraniyagala is an economist by profession and it shows in this, her first book, in which not a word is wasted.

Harry Eyres’ Horace and Me is an unusual kind of memoir in that one of its principal characters is someone who died over two thousand years ago. Writers, however, live on as long as their works are read, and this book can be recommended to anyone who has ever wondered what the point was of reading Latin poetry – or indeed any poetry. Eyres refreshingly argues that, far from being ‘a harmless hobby, like stamp collecting of kite flying […] a fun activity for children, or a form of escapism’, poetry really matters. Lyric poetry in particular, of the kind that Horace wrote, draws attention to the apparently small things of life that turn out to be the most important things, the things that sustain us as we make our haphazard way through the world. Ostensibly a double portrait of Horace and the author, two poets separated by two millennia, this is in fact a book about what it is to be alive and to be human. Eyres gives a marvellous and touching sense of the past reaching out to the present, which is something that Penelope Lively also writes about. Seemingly discursive, the book gradually exerts a hold on the reader, so that one ends up considering, alongside Horace and the author, landscape, friendship, mortality, the search for the ideal life, and the true significance of wine. It is all done with lightness but great intelligence, and the cumulative effect is both very impressive and unexpectedly moving.

Penelope Lively once described herself as ‘an archaeologist manqué’, and in Ammonites and Leaping Fish she digs down into the past to turn up shards that provide a fragmentary but fascinating portrait not only of the author but of the times through which she has lived. At eighty she is very aware of time, which, she observes, changes everything, while remaining ‘impersonal, indifferent: it neither knows nor cares’. Human beings, however, have ‘this one majestic, sustaining weapon, this small triumph over time – memory’. Her book is partly about how memory operates (or fails to operate), the different forms it takes, the sense it gives us of ‘then folded into now’. Writing about her life, Lively is acutely aware of what she calls ‘the accompanying roar of the historical process’, events and social changes that have shaped both her and the world in which she has lived. She also argues for ‘the eloquence of objects’, and her book ends with a consideration of six things she owns and what they mean to her, including the two that give her book its title. She values the fragment of Egyptian pottery depicting the leaping fish, for example, ‘because it says that a potter a thousand years ago had seen fish leap, because it has travelled through time and space like this, fetching up in twenty-first-century London, a signal from elsewhere’. This is a marvellous book about ‘A Life in Time’, as the subtitle has it: wise, funny, sharply observed and beautifully written.