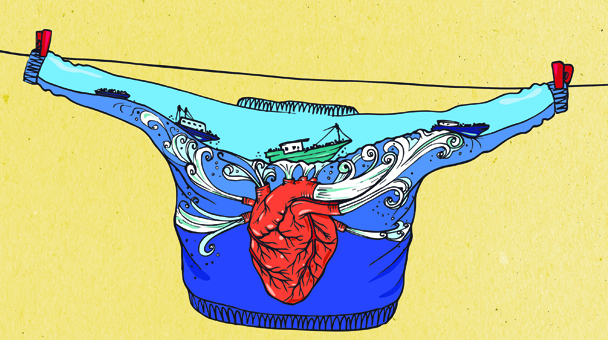 Every day this week, PEN Atlas is publishing a writer with a different perspective on the current global refugee crisis, and what it means for Europe. From a firsthand account of coming to the UK as a child refugee to a poet’s reflection on welcoming newly arrived young people through creative writing, each piece highlights the power of literature to reach across borders and to humanise the narrative on the story of global migration.

Each essay has been hand illustrated by Roberto Sitta via CreativeConnection. An e-book containing the five essays will be available to download soon.

This special PEN Atlas series is part of a joint campaign taking action in support of the nation’s migrant communities by What Next? arts and culture organisations across the UK.

Yovanka Paquete Perdigao is a Bissau-Guinean writer and researcher based in London. Her work is inspired by her experiences as a child refugee who found her voice through writing. She has an MSc in Violence, Conflict and Development and is interested by all things gruesome, but most importantly in how violence transcends generations in Lusophone countries. She is currently working with her sister on a book set in Guinea-Bissau during its 1998 war. She tweets @yova_nka.

Kirsten Boie is one of Germany’s best-known authors of modern children’s and young adult novels. She has published over 60 books, many of which have been translated into several languages. Boie has also written short scripts for children’s television, a children’s play, and lectures and essays on different aspects of children’s and youth literature. www.kirsten-boie.de

Joy Gharoro-Akpojotor is a Nigerian-born writer with a BA in Film Studies and an MA in Creative Writing in Films, Plays and TV. She has written two plays, Sunday and The Immigrant, which have both been performed at the Africa Writes festival in London. Aside from writing, Gharoro-Akpojotor is also an award-winning film producer.

David Herd is a poet, critic, and teacher. His collections of poetry include All Just (Carcanet 2012), Outwith (Bookthug 2012), and Through (Carcanet 2016), and his recent writings on the politics of human movement have appeared in Los Angeles Review of Books, Parallax and Almost Island. He is Professor of Modern Literature at the University of Kent, has worked with Kent Refugee Help since 2009, and is a coordinator of Refugee Tales.

Simon Mole is a London-based spoken word poet, with an eye for the often overlooked in the everyday. Simon was the inaugural Poet Laureate for Brent, is one fifth of the Chill Pill Collective and co-leads the Keats’ House Poets Forum. Simon has facilitated workshops with teenage refugees, prisoners, rehabilitating soldiers and the travelling community around the country for English PEN, Refugee Youth, Salusbury World and Tricycle Theatre, amongst others. www.simonmole.com