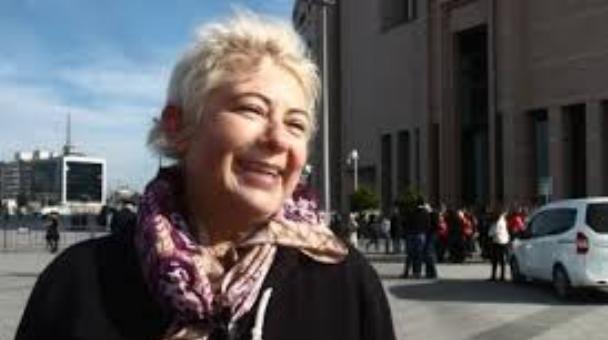 UPDATE (12 June 2019): PEN welcomes the release of Turkish writer, journalist and publisher Ayşe Düzkan, who was serving an 18-month prison sentence for ‘making propaganda for a terrorist organisation’. Düzkan was imprisoned for taking part in a solidarity campaign in 2016 with the now-closed pro-Kurdish daily Özgür Gündem. She was sent to Bakırköy prison in Istanbul on 29 January 2019 and conditionally released in June 2019.

Ayşe Düzkan has been a focus case for English PEN and fellow PEN centres around the world and was among the writers and artists highlighted during writer in residence Zehra Dogan’s installation at the Tate Modern in May 2019. Thank you everyone that took action.

Despite her release, Ayşe Düzkan’s sentence remains a stark reminder of the continuing assault on freedom of expression in Turkey, and the immense risk that many journalists face for simply doing their jobs. PEN urges the Turkish authorities to drop all charges against the journalists, writers and activists who remain on trial for their involvement in the Özgür Gündem solidarity campaign, and to release those who have been sent to jail immediately and unconditionally.

Free journalism provides the best chance we have that people can access truth and reality about the societies we inhabit. Everyone deserves that. Strange as it may seem, my spirits are high and my mood is good. We have a saying in Turkish that might be translated as ‘This will come and pass, too’. I am not brave, I am not a heroine, I try to do what seems right and doing that feels like happiness. – Ayşe Düzkan

Writer, journalist and publisher Ayşe Düzkan is serving an 18-month prison sentence for ‘making propaganda for a terrorist organisation’. She is one of 56 journalists and activists who took part in a solidarity campaign from May to August 2016 for the now-closed pro-Kurdish daily Özgür Gündem, during which they took turns in acting as ‘editor for the day’. Her prison sentence, handed down in January 2018, was upheld in November 2018. She was sent to Bakırköy prison in Istanbul on 29 January 2019.

PEN believes that Ayşe Düzkan is being imprisoned solely for the peaceful exercise of her right to freedom of expression and calls for her immediate and unconditional release.

Send copies to the Embassy of Turkey in your own country. Embassy addresses may be found here: https://embassy.goabroad.com/embassies-of/turkey .

Please reach out to your Ministry of Foreign Affairs and diplomatic representatives in Turkey, calling on them to raise Ayşe Düzkan’s case in bilateral fora.

Solidarity is a key component of our campaign. Please send messages of support in English and Turkish to:

Between May and August 2016, Ayşe Düzkan and 55 other journalists and activists took part in the ‘Editors-in-Chief on Watch’ solidarity action with pro-Kurdish daily Özgür Gündem by acting as Co-Editor in Chief for a day. The campaign was intended to draw attention to the Turkish authorities’ long-standing attempts to put pressure on the publication and its reporters. Özgür Gündem was temporarily shut down in August 2016 following a coup attempt in July on the grounds of ‘continuously conducting propaganda for the Kurdistan Workers’ Party (PKK)’ and ‘acting as a publication of the armed terror organisation’, and subsequently closed by emergency decree in October 2016.

Scores of journalists and writers were arrested for taking part in the solidarity campaign, including writer and prize-winning author and PEN member Aslı Erdoğan, renowned writer and linguist Necmiye Alpay and  Reporters Without Borders’ representative in Turkey Erol Önderoğlu. PEN has repeatedly denounced the detention, prosecution and sentencing of the Özgür Gündem guest editors, and condemned the Turkish authorities’ increasing crackdown on dissenting voices. Ayşe Düzkan was sentenced to 18 months in prison on 16 January 2018 under Article 7/2 of Turkey’s Anti-Terrorism Law alongside four other journalists, with the court stating their lack of remorse as a reason for their conviction. Her sentence was upheld by the Istanbul Regional Court of Justice on 29 November 2018. She handed herself over to the Istanbul Prosecutor’s Office on 29 January 2019, from where she was sent to Bakırköy Women’s Prison.

Ayşe Düzkan is one of at least 140 journalists and media workers currently detained in Turkey. Speaking outside the Istanbul Prosecutor’s Office before being sent to prison, she echoed concerns about the rising number of people imprisoned on trumped-up charges in Turkey and the long jail terms many writers and journalists have received. While her access to the outside world is limited, she has so far issued several statements from behind bars, including through PEN Netherlands.

Ayşe Düzkan is a well-known journalist and writer in Turkey and is active within the country’s feminist movement. Between 1987 and 1990 she wrote the Feminist Dergi (Feminist Magazine) for Kadın Çevresi Yayıncılık (Women’s Environment Publishing). She was one of the founders and later the editor-in-chief for the women’s newspaper Pazartesi (Mondays). Düzkan has worked for several newspapers and magazines including Radikal, Milliyet, Star, Pişmiş Kelle, Hayalet Gemi, Expres, Kırmızı Alarm, Yeni Gündem and Kaosgl. Her books include Çalar Saat (1994), Erkekliğin Kitabında Yazmaz Bu (2006) and Behiç Aşçı (2006).