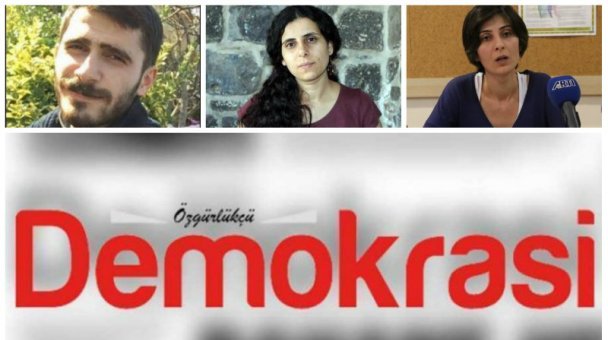 The members of staff on trial include editors Mehmet Ali Çelebi, Reyhan Hacioğlu and Hicran Ürün, managing editor İshak Yasul, publisher İhsan Yaşar and secretary Pinar Tarlak Ve Diğerleri who face charges of membership of a terrorist organisation and the publishing and distribution of terrorist propaganda. Other staff arrested at the end of March were released a few days later.

The defendants arrived accompanied by thirteen prison security separating them from the public. Those in the crowd included friends, family, international observers and supporters including Evrensel’s editor-in-chief Fatih Polat, who was to attend his own trial the following day. The majority of the crowd did not fit into the small courtroom, but their murmurs could be heard from inside.

The evidence filed against the defendants includes articles published by the newspaper referring to the Turkish military operation in Afrin with words including ‘resistance’, ‘occupation’, ‘massacre’, ‘martyr’, ‘Kurdistan’, ‘vicious attack’. The publishing of news related to Afrin and Turkey’s other military operations has led to a number of arrests of journalists since the attempted coup in July 2016.

I have no right to interfere with the writing… We are subscribed to national and international agencies and volunteers [providing the newspapers content].

It is up to you to decide whether to publish or not to publish a text. However, you do not have the right to change and distort the statements received… We are a newspaper that receives news from many news agencies. The sources of the news are clearly stated.

Each defendant was similarly fearless in their own defence: Hicran Ürün stated ‘I do not find these claims legal. I demand my acquittal’ while Mehmet Ali Çelebi spoke about the role of journalism in a democracy, stating ‘Freedom of the press is vital. The press does not determine the publication policy according to power’.

Closing, Özcan Kiliç, the lead defence lawyer declared ‘At this stage, I demand that the detention of the detainees be brought to an end and the arrest decisions made against some defendants be removed’.

Nevertheless, after a recess was called, the decision was announced that all but one defendant, Pinar Tarlak Ve Diğerleri, the secretary of the paper, would remain detained until 6 December.