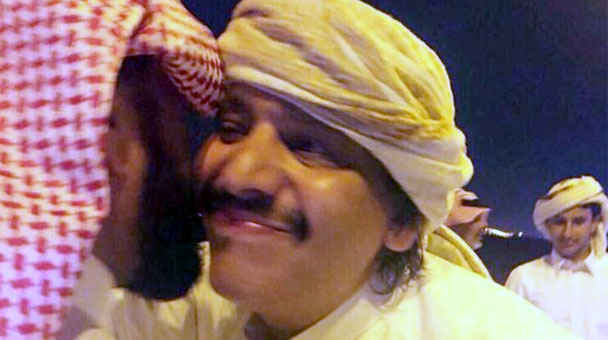 English PEN warmly welcomes the news that Qatari poet Mohammed al-‚ÄòAjami has finally been pardoned and released after more than four years in prison. While this is a hugely welcome development, PEN maintains that the poet should never have been detained.

We are delighted by the unexpected news that,¬†having spent more than four years in prison for his poetry, poet Mohammed al-‘Ajami has finally been released from prison and reunited with his friends and family. Nevertheless, as the terms of his release remain unclear, we will be urging the authorities to ensure that no conditions are imposed on his release and continuing to call for all remaining charges against him to be dropped.

This is heartening news, coming as it does just days before World Poetry Day, but it‚Äôs ludicrous that al-‘Ajami, a father of four, spent almost five years in prison, simply for reciting a poem in private. Qatari authorities must ensure that all its citizens are free to express themselves peacefully without fear of imprisonment or reprisals.

English PEN and our sister PEN centres around the world have been campaigning for Al-‚ÄòAjami‚Äôs release since his arrest in Doha in 2011 on charges of ‚Äòinciting the overthrow of the ruling regime‚Äô and ‚Äòinsulting the Emir‚Äô in his poetry. Al-‚ÄòAjami was initially sentenced to life in prison, reduced to 15 years on appeal in February 2013.

In October 2013, representatives of PEN International and PEN American Center travelled to Qatar to meet with authorities at the Public Prosecution office to formally request access to Al-‚ÄôAjami‚Äîwho was being kept in solitary confinement and whose prison visitation rights were severely restricted‚Äîand were approved to visit the poet. The delegation was met with a series of obstructions when they reached Doha‚Äôs Central Prison, however, and was ultimately denied access by prison authorities. Al-‚ÄòAjami‚Äôs family told the PEN representatives that the poet knew they were there and was uplifted by the visit.

Most recently, English PEN joined Amnesty International to host a vigil for Al-Ajami and to deliver a petition for his release to the Qatari Embassy in London. Photographs are available on Flickr and you can view footage of the demo on YouTube or via the player below.

Al-‘Ajami is also among the international writers who will be featured at the inaugural English PEN Modern Literature Festival in April 2016, for which he has been paired with Nathan Walker.

Thank you to everyone who campaigned for his release, whether you attended vigils and readings, signed a petition, or wrote a letter to Mohammed al-‘Ajami in prison. We’re hugely grateful for your support.

To help English PEN continue to support writers at risk like Mohammed Al-‘Ajami please consider becoming a member or making a donation.